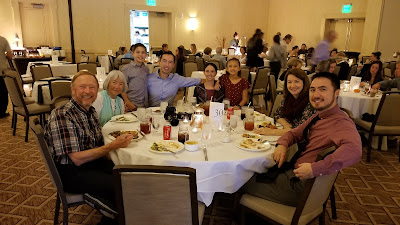 For Thanksgiving this year, we met Alex, Laura, Grandpa and Grandma in Isle of Palms South Carolina at the Wild Dunes resort. In the past, we took the big SUV for the drive and this time we decided to try and drive our Tesla. It was a bit of a squeeze, but we got everything in and since this year our rental included some bikes, we didn't have to worry about the bike rack. We got in on the Sunday before Thanksgiving and spent the first part of the week playing tennis in the mornings and in the afternoons I'd work.

We've always enjoyed the tennis clinics at Wild Dunes because in the mornings they have the kids tennis clinics at the same time as the adult clinics. This trip, for the first time, we requested that Connor play in the adult clinics with us. On Monday we warmed up with him and then one of the staff offered to let Connor try working out with the academy players on some of the other courts. We encouraged Connor to try it out and unfortunately it was a bit intense and the players were quite a bit bigger and older and better so Connor didn't enjoy it too much. On Tuesday, Connor stayed with Andrea and I and we really had a lot of fun playing with him and seeing him compete with all the adults. Unfortunately on Wednesday, one of the other adults tried to bring a younger player and the pros decided that it would be better to keep the kids and adults separate, so it kind of ended our fun with Connor in the adult clinics. They did allow him to play in with us on Thursday, but we were a little uncomfortable about it by then and when Connor played on Saturday (he took off Friday), he went to the kids clinics. He's improved a lot and definitely could hang in there with the adults, hopefully in the future it will work out better as he gets bigger and older. 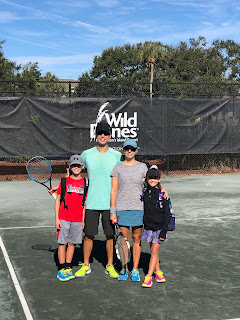 Alex and Laura arrived Tuesday evening and Grandma and Grandpa arrived on Wednesday. This year Andrea rented us a house in Twin Oaks (#3) and we had three bedrooms so Alex and Laura stayed with us while Grandpa and Grandma stayed across the street in the hotel. We did some puzzles, played games, played tennis, rode bikes, and the most fun we all had was pickleball.

On Thursday morning we did our regular tennis clinics and skipped the parade. At 1pm we went to the Sweetgrass Pavilion for the Thanksgiving buffet. 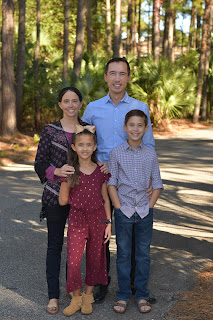 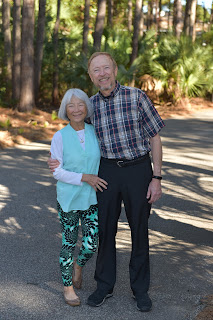 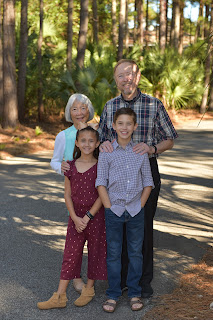 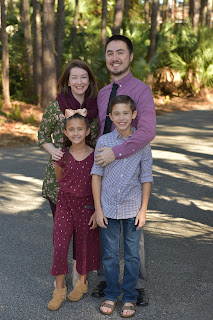 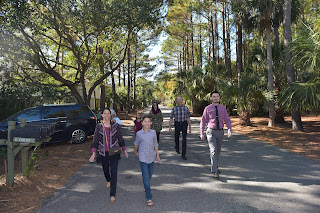 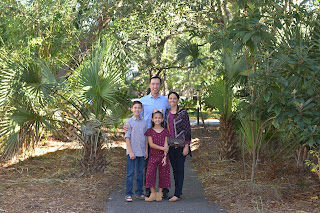 We don't tend to like buffets, but the Wild Dunes Thanksgiving buffet is pretty amazing and big. They had 3 kinds of turkey, ham, roast beef, and all kinds of sides and desserts. The smoked turkey and regular turkey were the favorites while the "Drunken Nutty" was a bit odd and not well received. During dinner we went around the table to say what we were thankful for and what our favorite food and favorite desserts were as well. The kids also did a "Lemon Challenge" with Alex and Laura. 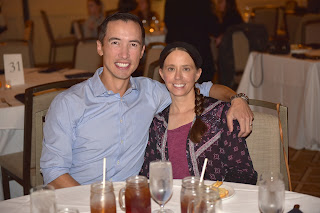 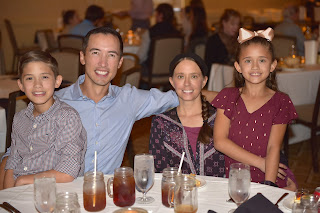 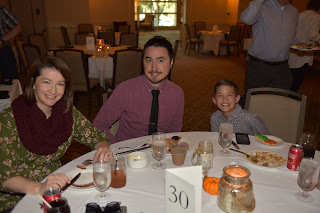 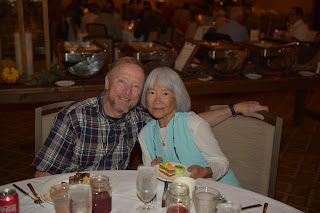 After the meal we snapped some pics with the props outside the buffet hall. 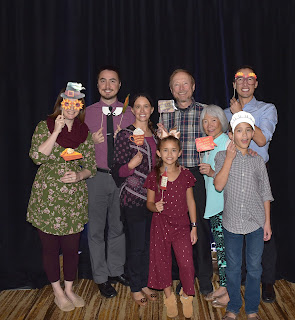 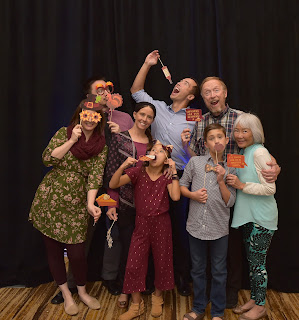 Overall, one of the hightlights of the week was the pickleball. Grandma and Grandpa brought their pickleball gear and the tennis center had equipment they'd lend out for free. There were four courts that were a bit cramped together, but it was a nice setup and the courts were usually not busy so we got to play a lot. It was nice that we had 8 people in our group, so we tended to have two courts going at a time with all kinds of matchups. In the end, it was VERY clear that Connor was the star player. Connor was pretty much able to win with anybody he played with and it was virtually impossible to squeeze a ball past him or pop it over his head. Paige was surprisingly good at pickleball as well and she cracked the ball with her tennis strokes and was so quick and able to track down every ball that came over the net. On Saturday, Andrea and I played against Paige and Connor and they destroyed us. We had some exciting points with a lot of volleys at the net and tons of action, but the kids were just too good. I was proud of both of them, but honestly a bit frustrated that I couldn't find a way to beat them with Andrea. We definitely tried hard to win! 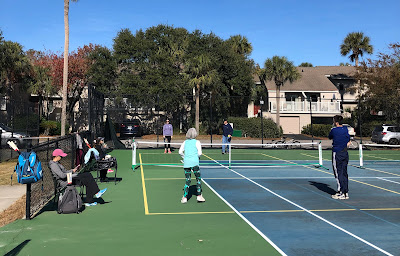 We took a few videos early on in the week of the pickleball action, and although they were pretty nice representations of pickleball, some of the points later on in the week were amazing and I wish we'd gotten them on camera.

This time of year it gets dark around 5pm, so we had a lot of time in the evenings to relax together, snack, and watch some tv. We watched some football, soccer, and we all enjoyed the "Great British Baking Show" on Netflix. Andrea ordered us a couple of pumpkin pies and a super tasty apple pie from Kudzu bakery and they were amazing. We enjoyed eating at McAlister's and Page's Okra Grill, but we also had two evenings where we got to enjoy Alex and Laura's cooking. On Friday night Alex and Laura did a lot of work to make everyone homemade lasagna. I think it took a little extra time since they had a little helper in Paige with them who enjoyed the entire process. We took a quick pic before we dug in, and sadly Paige's tummy was upset and she didn't get to enjoy the lasagna with us. 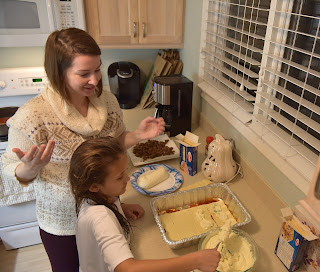 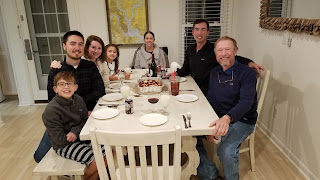 The house we rented turned out to be one of the coziest and comfiest. The house was a bit small, but it was nice since we had a garage and were able to plug in the car, and the covered patio out back was finished stylishly and had a super comfortable couch. 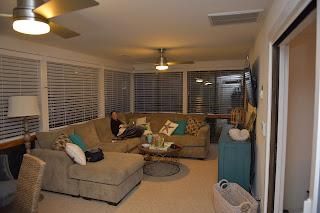 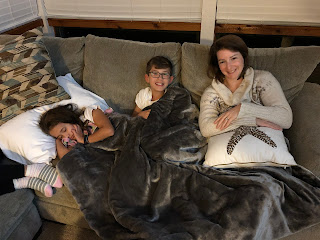 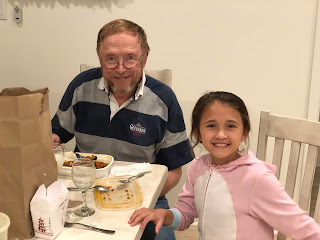 On Saturday afternoon, I went with Alex, Laura, and the kids to the beach and we threw the football around, climbed on a big hollow log that someone planted in the sand, and drew a heart on the beach with "Vernon Fam 2019". 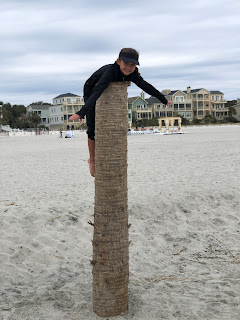 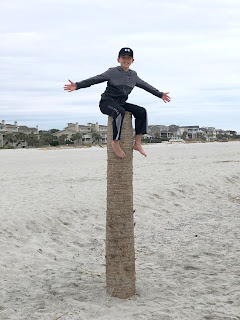 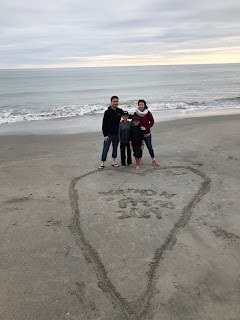 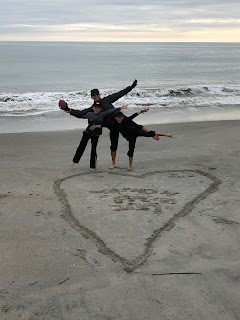 Thanksgiving was so much fun this year. We have so much to be thankful of. We are thankful that our family could come together and be together, that Andrea's been feeling better and was well enough to compete in tennis and pickleball, and that the weather was almost perfect (just a bit cool at times) all week. Happy Thanksgiving!
Posted by Shawn Vernon at 7:00 PM