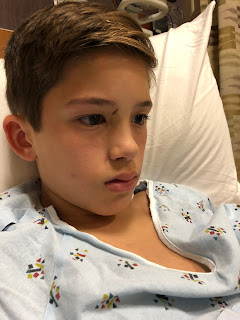 The first week of January, Connor had a little bit of a rash that looked similar to the hives Andrea had late last year. We put some lotion on it and hoped it would go away, but a few times we had to go to his school to bring him more lotion and it didn't seem to get better. On the 7th, after school, we noticed his lips were starting to swell up. We were worried it would constrict his airway so we rushed him to the ER where they gave him some medicine and kept an eye on him for a few hours. We were discharged with a prescription for epipens and Connor ended up going to the dermatologist the next day and then our general physician the next week. We're not sure what caused the reaction, but it was possibly related to a viral infection or something that triggered his immune response. With medicine, it eventually went away, but we were pretty worried about him for a while there.
Posted by Shawn Vernon at 7:09 AM

He does not look happy in that picture. I guess I wouldn't be either. Poor guy.