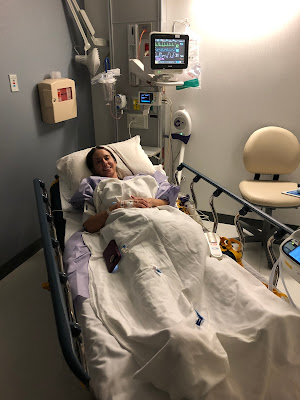 On Tuesday, 1/21/2020, Andrea had the final phase of her mastectomy reconstruction and also had surgery to remove her uterus and cervix which essentially completes the hysterectomy (her ovaries and tubes had been taken out previously). Each of the procedures were not considered major surgeries, but since Andrea wanted to take care of both at once, it was a little more complex to coordinate and it is going to be a bit more difficult for recovery.

We'd anticipated Andrea's surgery would be the first of the day since there were two surgeons involved, but unfortunately they decided to schedule it for 3pm. This kind of messed up what we'd planned on for my work and for the kids' schedules with school, but thankfully Grandpa Rick stepped up for us and came on Tuesday afternoon to make sure the kids got home from school without any problems and he ended up staying the night at the house with them since Andrea ended up having to stay the night after surgery.

Andrea's surgery started a little bit late and I gave her a goodbye kiss and they wheeled her back to the OR around 4:15. I went home for a little while and got things together with the kids and ate with them and with Grandpa Rick at Longhorn. A couple hours later (around 6:30) I got the call from the plastic surgeon that the reconstruction and exchange surgery had gone perfectly and that the hysterectomy was starting. I got a call fairly soon after at 7:30 when Dr. Dinh completed his portion of the surgery. He reported that everything looked good and normal and that there were no problems. One of his residents completed the closure and wrapped everything up and I went to the ICU waiting room for them to bring her out of the recovery area. It took quite a while and it was a little after 10pm when they finally wheeled her up to her room. It took quite a while that evening to get everything taken care of and to get Andrea tucked in and for me to make up an area to sleep. We got a little sleep that evening and then the next morning we went home after discharge.

Andrea has been doing really well since she got home, actually probably better than I have. I didn't sleep much in the hospital and I struggled a little to get caught up with work and it was hard not to be grumpy. Andrea only took a small amount of pain medication the first couple of days after surgery and hasn't had anything at all for a while now. So far so good, every day I'm impressed with Andrea for being such a strong woman and enduring so much since her cancer treatment. She is an amazing person and has handled every step with grace and she makes me so proud. We all love you Andrea!
Posted by Shawn Vernon at 6:50 PM