Connor and Paige both played in a level 7 tennis tournament this weekend. Connor had one match on Saturday and two matches on Sunday. Paige had three matches on Sunday. The tournament was at JCP and there were quite a few good players there. Connor won his first two matches and made it to the final match. The final match was very competitive and he hit hard and played really well, but fell behind in both sets and came in second in his age bracket. 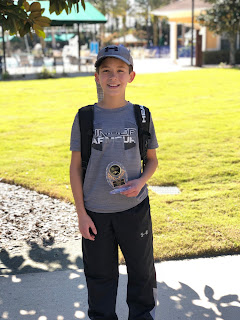 Paige struggled a little with her tennis today. The first match had an awkward confrontation when her opponent's father got upset because Paige was trying to figure out if her opponent was serving on the wrong side. Unfortunately the court monitor didn't help out and an official had to get involved to get things back on track. Paige was in a bit of a funk after that and ended up being a little off the rest of the day. She lost her first two matches and lost the first set of her final match before she turned it around. Paige managed to win the second set in her final match and won the tiebreak as well to end the day 1-2 overall. 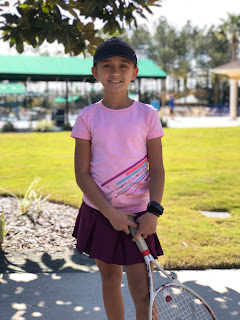