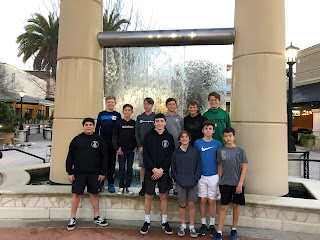 This past Friday on February 28th, we celebrated Connor's 13th birthday with some of his friends by going to an Escape Room Birthday party. In the afternoon after school, his friends got dropped off at the house. Before we left, the boys played basketball and knockout in the driveway and then they played football out front. 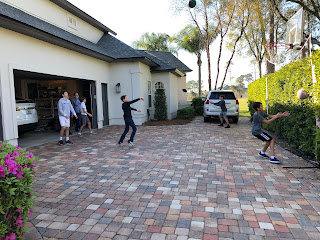 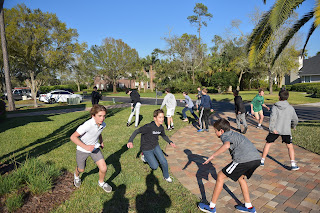 Football was supposed to be two hand touch, but inevitably Connor and some of his friends ended up in the damp grass and with muddy clothes. Before we set out, we snapped a picture together and then we all jumped on board the big white 12 passenger van we'd rented for the day. 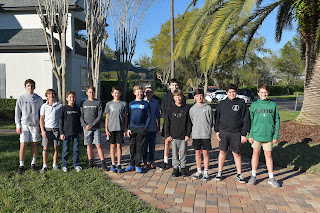 I drove the boys to the escape room and we all signed in and snapped a pic before we started. 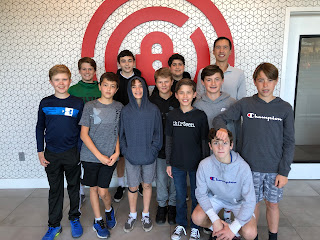 The escape room was divided up in to multiple sections and there were 10 tasks we had to complete to escape the room. Connor insisted that I didn't help, but after a few minutes we all realized that it was going to be pretty challenging and we were in for a struggle. It didn't help that when we started everything was wildly unorganized and the boys all were opening things up randomly and items were being tossed everywhere. We finally had to use a clue (only three clues are provided) and got the first step done which opened up the next room and we made really good progress for a little while and random groups of boys found different clues and solved different things. It was hard at that point for me to wrap my mind around everything that had been done and needed to be done. We ended up getting pretty close, but couldn't solve the final puzzle and ran out of time. 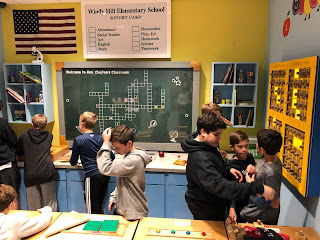 After our escape room challenge, we drove over to Cantina Laredo and thankfully Andrea realized that the private room hadn't been reserved, so they let us use it without having to commit to spending the minimum charge for food and drink. Andrea had the room setup really nicely with balloons, decorations, and a big tray of donuts. As soon as the boys arrived they excitedly dug in to the donuts and they were all eaten before we even got our drink order placed. 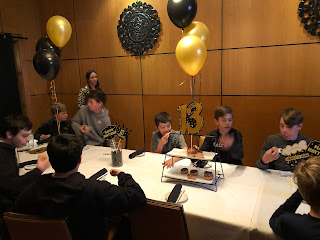 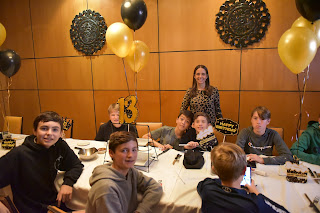 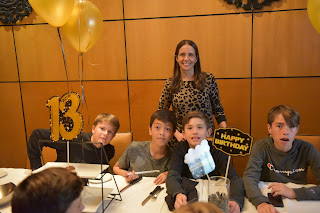 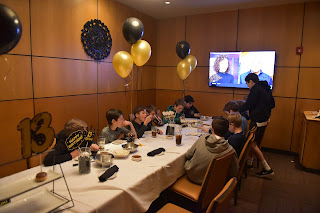 Dinner was good, and thankfully we had the private room, because the boys were pretty loud. We watched some Wheel of Fortune, Judge Judy, and Jeopardy together and then snapped a few pictures. 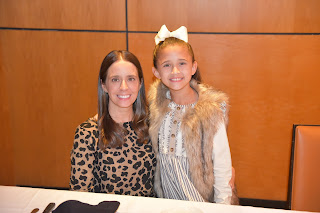 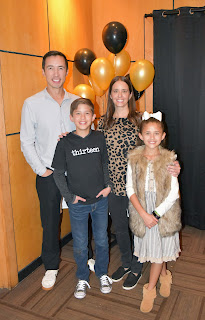 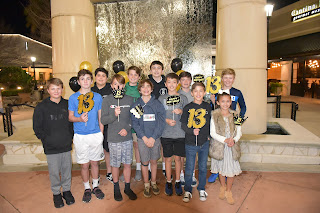 After dinner, the boys ran around the outside area near the restaurant. Pickup was at 8:30 at our house and we decided to just let them run off some energy outside the restaurant before I drove them home, which worked out marvelously. The night was crazy at times, it was hard to keep the pre-teen boys organized and together, and out of trouble, but we did it. I managed to get them all to the van and home again and we all survived! I asked Connor to rate the party on a 1-10 scale and he happily replied that it was a 10. I'm glad he enjoyed it, and it was fun to meet some of his friends we hadn't met before and see them all together. 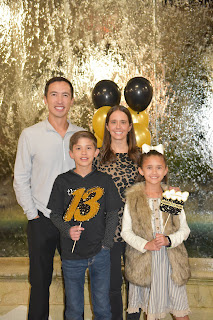