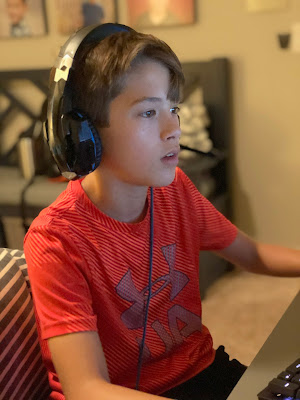 With being home a lot, Connor's had plenty of time to enjoy Fortnite. I feel like I should update the blog about Fortnite since it's back in our family with a vengeance. Paige plays from time to time, but she really likes to play a variety of games. Connor, on the other hand, pretty much exclusively plays Fortnite. Connor got very good on the Xbox, and he enjoyed playing on the Switch for a while, but in the past few months he's switched over to playing on the PC and he's gotten extremely good at it. He's actually at the point where he's legitimately so good at it that it's really impressive. I will wander in to the kids' office sometimes and watch him play out a game and it's pretty entertaining.

When I play Fortnite with the kids, I mostly focus on the shooting and fighting, but Fortnite is really all about the building. A good player will build these crazy structures, edit them, shoot the enemy, re-edit them and then build more and more objects in 360 degrees around themselves. I watched Connor tonight win a game and he was keeping track of multiple players around him, inputting multiple commands per second, and constantly staying one step ahead of his opponents. The kids like to watch Youtube videos of pro players and Connor loves to hear all the keypresses and inputs when a player is really going nuts and battling. He recently wanted to spend some of his own money to get a new keyboard and we did some shopping online and he decided he wanted the "Razer Huntsman Gaming Keyboard: Fastest Keyboard Switches Ever - Clicky Optical Switches" keyboard. It came on Tuesday this week and he's been getting used to it and I took a video of him practice fighting with one of his buddies. You can really hear all the inputs and clicks while he's playing.

Since school came to an end, and since Connor has been such a good student working from home, we decided to pay for the keyboard for him as a reward for a great academic year. Hopefully it will win him some Victory Royales!
Posted by Shawn Vernon at 6:50 PM

Wow! Really - Wow!! That's some pretty fast playing. If I were to try and play half that fast, I would probably get sick from the fast video. Connor is very quick.