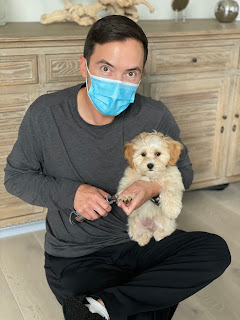 Millie Mae is getting bigger, cuter, and more mischievous every day. She has learned a lot of tricks like come, sit, stay, lie down, roll over, shake, settle, and "sit pretty" which is "beg". We changed from saying "beg" since I think she thought we were saying "bad" and would look very sad while we were trying to make her do the trick. We can tell that Millie's a smart cookie, although she definitely isn't as eager to please as some other dogs we've worked with. I hate to always compare her to Chloe, but once Chloe figured out what you wanted, she was eager to please. Millie Mae likes her treats and will perform if you have treats. If you're trying to get her to listen to you while she's busy, or while she wants to do something else, tough luck.

I've been giving her a bath each week and she doesn't enjoy it, but tolerates it nicely. She has also gotten better about tolerating her nail trimming. Millie is getting to a point that I believe she may actually enjoy going on walks. She doesn't cry or whine during the walks and will "heel" and come next to you if you give her a tug on the leash. I've also been working with her to sit when we stop, and as long as there aren't too many distractions, she does really well.

The last couple weeks, Millie has become a sneaky pooper. She will go on the puppy pad most of the time, but she will also sneak off and poop random places. Connor found some behind the couch the hard way while the Gobles were in town. Ryan was chasing Connor around the house and Connor stepped, barefoot, right in a big turd which was on the carpet behind the couch in the family room. Amanda thought it was one of the funniest things she'd ever seen, and if you've ever seen the way Connor reacts when he has to pick up one of Millie's poops, you would understand how traumatizing it was for him.

We are still working with the kids to get them to help out more with Millie. They can do a lot, but only with a lot of direction and on demand, which can get exhausting. 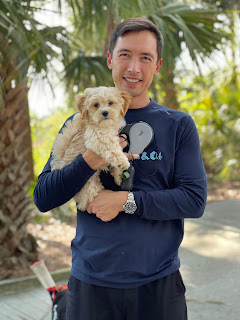