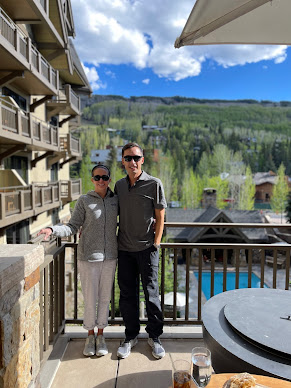 On Thursday, May 27th 2021, Andrea and I flew out to Denver and then took a car service to Vail. We stayed at The Sebastian which is in a convenient location in Vail Village. We had originally been planning to go to Orlando for the Memorial Day holiday weekend, but Andrea checked the weather and it was supposed to be in the mid-90's. We just were not ready for the heat of the summer yet and decided to look in to some areas that were cooler. Vail has been on our list of places to visit for a long time and it ended up being a great time to travel there. The weather was in the 60's to 70's for the highs, and at night it dipped as low as the upper 30's. It was strange, perhaps because of the low humidity or altitude, but it didn't seem that cold when we were outside and it was in the 40's. 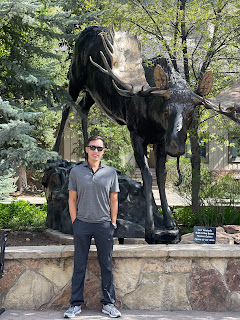 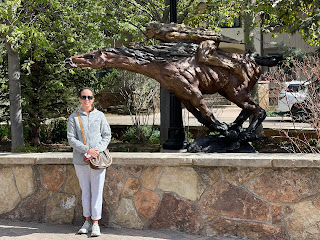 On our first day in town, we hiked around Vail Village, got our bearings, and ate at the Four Seasons restaurant for dinner. We found an ice cream shop "Sundae's" that had homemade ice cream, which was some of the tastiest ice cream we've had on our vacations. Andrea liked the strawberry flavor with a waffle cone dipped in sprinkles. I liked the coconut, blueberry, and the salted Oreo flavors. 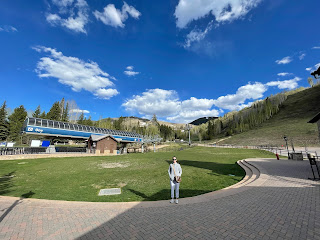 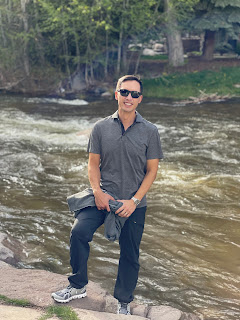 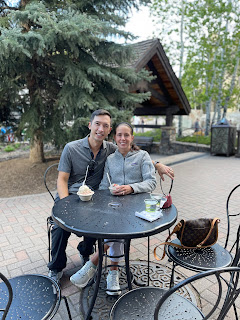 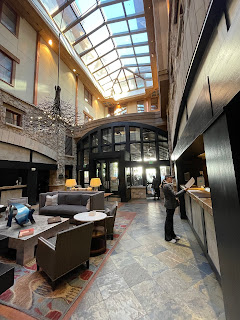 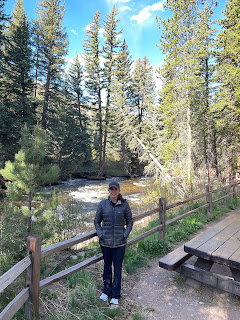 Friday morning, we left fairly early to go whitewater rafting with Timberline Tours. The water levels in Colorado were lower than normal due to the abnormally low amount of snow over the winter. Our guide Meg gave us a quick overview on rafting and then we set out down the Shoshone rapids on the Colorado River in Glenwood Canyon. We went through some pretty exciting class three rapids that kept us on our toes for about a mile and a half. Once we finished, we hauled the boat out of the water, up a ramp and put it on the van's trailer and then we drove back to the starting point and did it again. While it was nice that we got to do an exciting part of the river three times, it was a bit difficult hauling the raft up and down the ramps to the water. I think we probably would have enjoyed it more if we stayed in the raft for the entire time, but it was nice that we got to experience one of the more exciting parts of the river multiple times. Each time we went through the rapids, it was different and we took slightly different routes. I enjoyed re-running the same stretch more than I expected that I would. The first time through the rapids, Andrea and I were in the front and we got absolutely drenched. Andrea got hit the worst and we submarined in one section, the entire raft went underwater and Andrea got knocked off her perch and almost ended up in the bottom of the boat. The water was super cold, but we did have wetsuits on and windbreakers that kept us fairly comfortable. Andrea and I took the middle seats for the second and third time through the rapids, and it was a much more chill (and dry) experience. 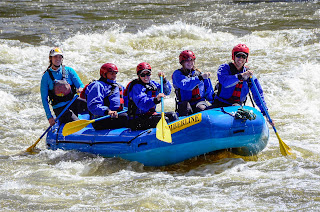 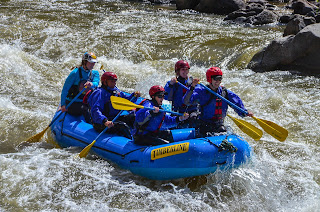 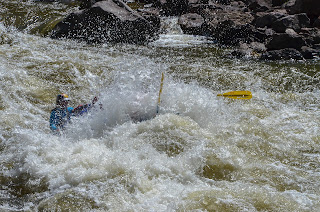 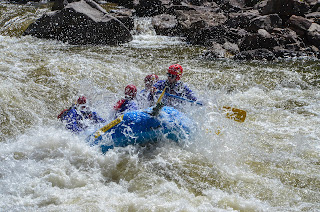 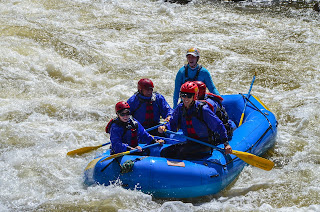 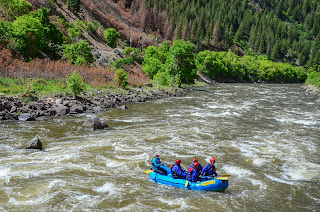 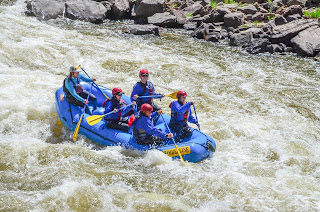 After our third time through, we packed everything up, stripped off our wetsuits, and got dressed. There were no facilities there so we put on our clothes and were pretty gross and cold. We started the drive back down I-70 and as we came around one corner of the canyon our driver had to come to a stop due to traffic up ahead. We could see that something looked like it was hanging off the side of the road and after a few minutes we realized that nobody was moving. The cars separated to the left and right sides of the highway to let emergency vehicles through and I got out and jogged up to the front of the jam to see what was going on. The highway was divided in to two separate elevated roads and an 18-wheeler went over the edge of the westbound road, fell 25 feet, flipped upside down and ended up blocking the entire eastbound highway. The contents of the truck spilled out everywhere and apparently the vehicle almost caught fire. Thankfully the driver was alive and thankfully the truck didn't land on top of anyone. If we'd left thirty seconds earlier, it would have landed on us. Unfortunately, the section of road was fairly inaccessible and it took a long time for emergency services to arrive. We had to wait for over three and a half hours before the lanes were clear enough for us to get through. It was not a very comfortable wait and there was no cell service at all. 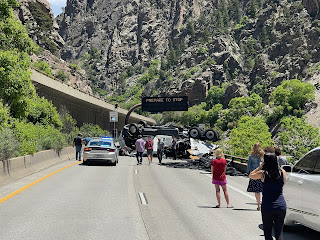 Once we got back to Vail, we ate and then went hiking. We brought some hiking shoes that we'd gotten online, but we weren't crazy about them. On the way to the trails, we stopped in one of the local stores and they had some ON brand hiking shoes that we both liked. We went up to the mountain and hiked the Strawberry Lane trail for over a mile. It was fairly steep and we went up a few hundred feet before we decided to turn around. 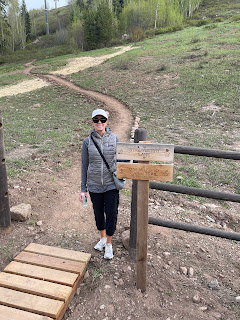 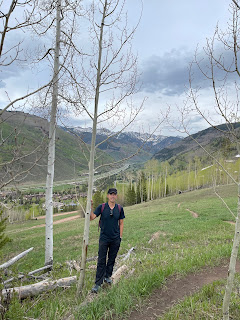 Saturday morning we walked to the base camp and rented a couple of electric bicycles. The area was super hilly, so it was fun to be able to zoom up the hills without too much work. We rode way out West before lunch, then after lunch we rode out to the East. We mostly stuck to the Gore Valley Trail, which did go on the street in a few areas. It was a fairly bike-friendly area and we got to see a lot of the Vail area while getting a bit of a workout. Unfortunately, the bike seats were super small and hard wedges that got very painful after a few hours on them. We tried not to put much weight on the seats, but by early afternoon we'd had enough and returned the bikes a couple hours early. 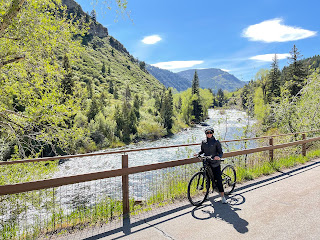 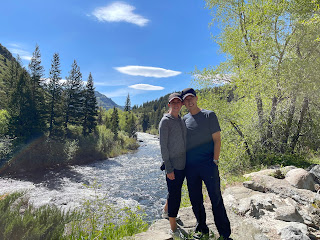 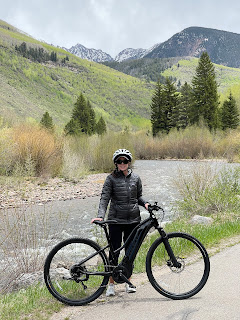 It ended up raining a bit in the afternoon on Saturday, but we got back out in the evening and went on a walk and got some dinner. 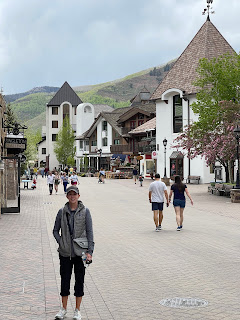 On Sunday, we were worried about the thunderstorms that were in the forecast. Andrea actually called the tour company to see if we could/should cancel, but they had a 24 hour cancelation policy and said they'd go out rain or shine. We went for a hike early in the morning and went part way down the Vail Trail before turning around to get back to the hotel in time for pickup. As we were going through the woods, I heard some rustling and looked down the mountain to see a big bear running through the brush. I spotted it a few times between the trees before it disappeared behind a house. It was a little scary since we were completely defenseless, but thankfully the bear was about 100 yards away and just wanted to get away from us.
Nova Guides picked us up at 10am and their shuttle took us out to Camp Hale, where the 10th Mountain Division trained before deployment in WWII. There were some other tourists signed up to do normal ATV's, but Andrea and I were the only ones signed up to do the side-by-side ATV, so we got a private tour with our guide Dimitry. We took turns driving on the bumpy, rocky, dusty roads and went quite a ways up in to the mountains. It got pretty cold at the higher elevations and as the rain clouds started forming, Dimitry fashioned some rain gear for us out of big plastic trash bags. We hiked out to a waterfall and got to see a lot of beautiful views of the valley. 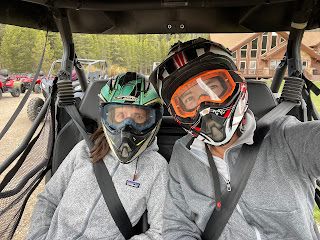 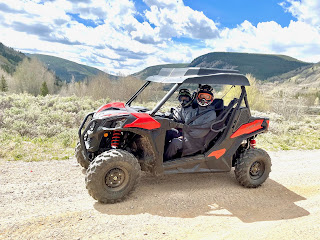 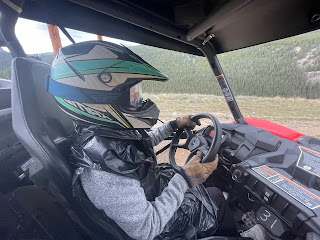 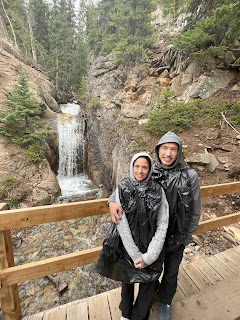 After getting back to our hotel, the storm clouds finally arrived and it rained pretty hard. Andrea and I went to get ice cream at Sundae's and then we ate dinner at the hotel.
Monday morning we went on a long hike and saw a moose across the river. We ate at Red Lion one last time, their nachos were my favorite nachos of all time, and got ice cream one last time at Sundae's before our driver arrived to take us to the airport. 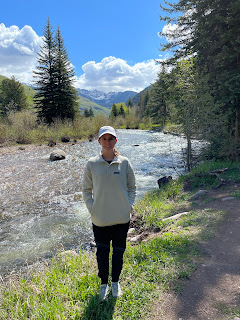 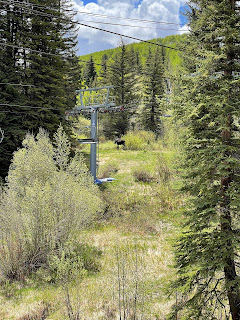 Overall, it was such a wonderful vacation. It was awesome to enjoy the cool weather and to explore the Vail area. Vail was beautiful, the people were friendly, the food was delicious, the scenery was breathtaking, and it was neat that we even got to see some wildlife on our hikes. We definitely enjoyed it and plan to go back, but not sure yet if we want to try a skiing vacation. Summertime in the mountains sounds nice. 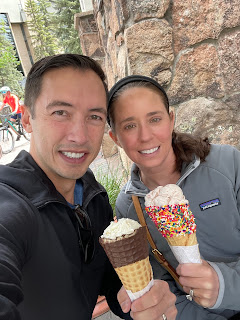