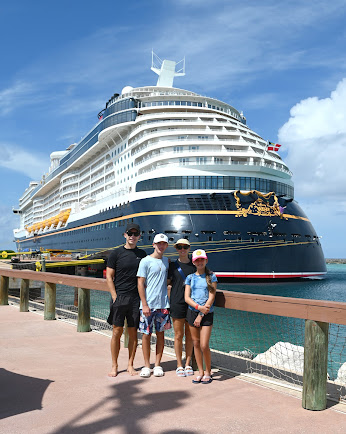 August 5th, we boarded the brand new Disney Wish for our sixteenth Disney cruise. The boat is quite different from the other four Disney boats and it was fun to explore all the new attractions, dining rooms, and decor. Minnie Mouse is the captain of the Wish and when we saw her we made sure to tell her what a great job she was doing.
Before our rooms were ready, we wandered around the ship and went to the Oceaneer's club for the open house. 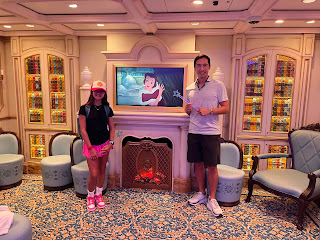 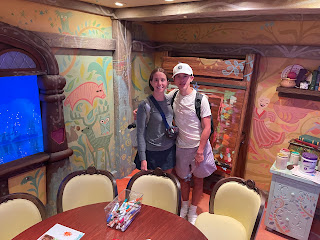 When we were able to get in to the rooms, we unpacked our things and checked out all the new changes. We liked that the closet doors slid side to side rather than swinging out into the cramped entryway. We also thought the shower was much improved with a glass door rather than a shower curtain. The showers also seemed a few inches wider, which seems like a small change, but made them much more comfortable. The beds and overall layout were pretty much the same, however the drawer space was a bit more limited than on some of the other boats. 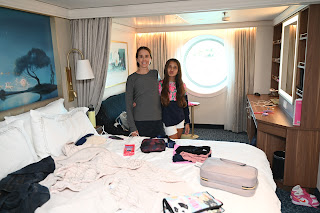 After unpacking, the kids were a bit grumpy and were content to sit in the rooms and watch all the available movies on the TV's while Andrea and I went exploring. The icecream/sweets shop is "Inside Out" themed and is named "Joyful Sweets". Andrea stopped in for her icecream and sprinkles. 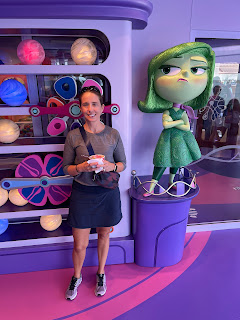 Our first dinner was in the Frozen themed Arendelle dining hall. The feast was to celebrate Anna and Kristoff's engagement and there was live music as well as appearances by Anna, Elsa, Olaf, and Kristoff. 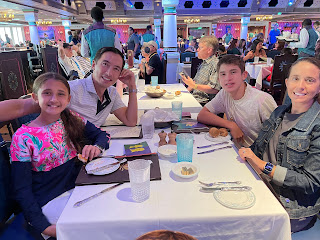 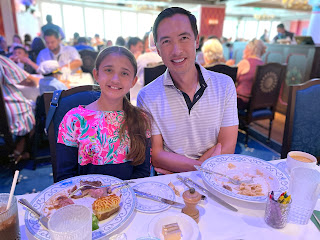 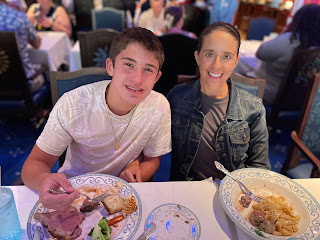 After dinner we wandered around and took some pics with Minnie and then watched one of the new shows "Disney Seas the Adventure", which featured Goofy trying to figure out how to captain a cruise boat. 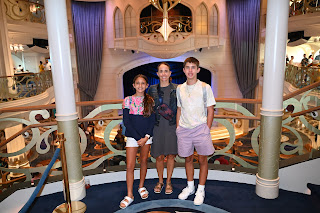 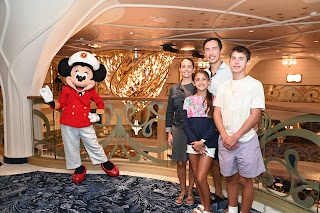 Saturday was at Nassau and we decided not to get off the boat so we could enjoy it with less other passengers around.
Paige loves the cruise food, it's likely her favorite part. We did our meals a bit different this time and we all went for a late breakfast together. Paige likes the Mickey Waffles with strawberries and cream. Andrea likes the waffles with syrup. I like to get oatmeal and muesli, and Connor doesn't really like any breakfast food but typically would get some eggs. 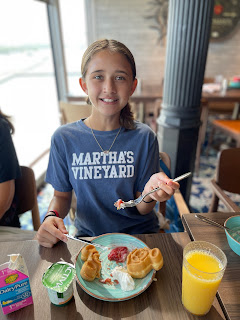 After breakfast, we rode on the Aquamouse water ride, which was very similar to the ride on the Fantasy and Dream. The line was a bit long, but it was nice that you didn't have to climb a bunch of stairs. Instead, there was a conveyor belt that would take you up in your raft and then drop you down the slide. The ride was stopped at one point while we were in line because of some kind of issue and it took forever for them to clear it and start it back up. Andrea and Connor finally got in their raft and Paige and I got in the raft just behind them. We rode the conveyor belt up to the top and watched the cute cartoons on screens that lined the walls of the conveyor belt tube. Andrea and Connor rode down in front of us and just at the last moment, as Paige and I were about to drop in, the ride stopped. We had to get out of our raft, walk down and then wait for about 15-20 minutes while they fiddled with the ride. Andrea heard one of the workers say that the lady sending the rafts up was doing it too fast and if there were too many at the bottom, the ride would shut off to prevent people from running in to each other. Whatever the cause, it was a long wait for the ride and we only rode it once.
The Wish had a lot of different food options on the top deck, compared to some of the other boats. Like most cruise boats there were stations for pizza and a station for hamburgers and hotdogs. The Wish had a BBQ option as well as a Chipotle style Mexican option which was fantastic. 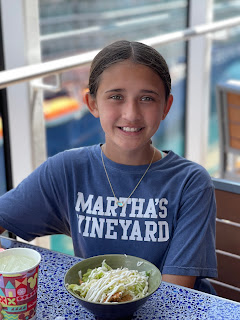 After we got done swimming, we went to the theater to watch the Pixar movie "Lightyear". There were multiple smaller theaters on the boat with staggered movie times, which was a nice change. The seats were pretty comfy and we were enjoying the movie until the screen went black. We could still hear the movie, but there was no picture for about 15 minutes. They finally got it working again and then had to rewind the movie for us. Not a huge deal, but just one of the glitches that come from being on a new boat.
Another disappointing issue with the new boat was the "Mystery" type game that was supposed to be working, but wasn't. There is supposed to be a game that you can play, much like on the Dream and Fantasy, where you go around the boat and interact with screens and decorations using an app on your phone. We spent a while trying to figure out how it worked and finally had to ask, only to find that it wasn't operational for our cruise. Hopefully it will be working the next time we cruise on the Wish. 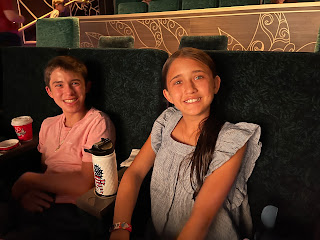 After the movie we went to the "Hero Zone", which was a super nice indoor gym. The gym had a basketball court (although there's only one hoop which seemed odd to me), and a bunch of games like ping pong, foosball tables, air hockey, etc. On Saturday afternoon they had a big inflatable obstacle course. Connor didn't want to do it, but Paige agreed to race me, so we ran through it once. Paige absolutely smoked me, however she kind of cheated by just running around the big X's and she didn't jump on to the swinging balls either. Probably didn't matter, but I don't believe it was as close as it would have been otherwise. 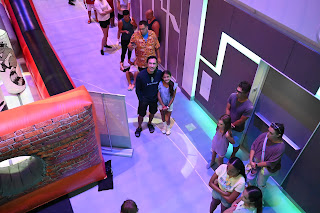 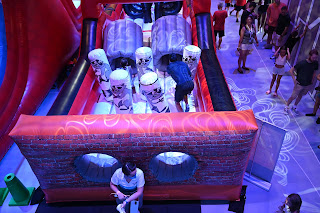 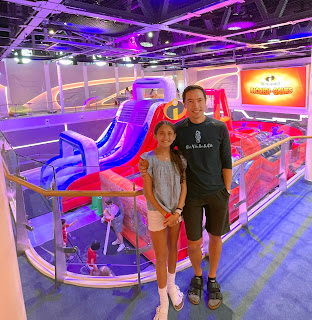 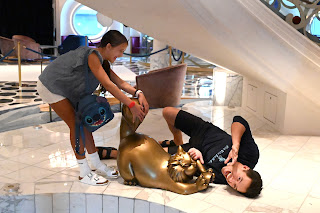 In the evening we went to the 1923 restaurant which celebrates the year that Disney was established. The decor was a bit more elegant and there were boxes with various movie memorabilia throughout the area. 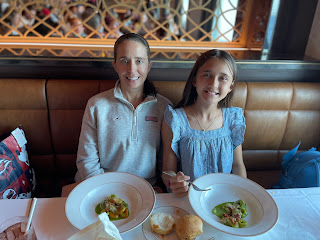 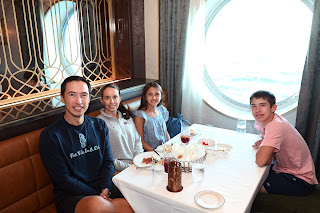 In the evening on Saturday we went to another new show "The Little Mermaid".
Sunday, August 7th, we were in Castaway Cay. We slept in a bit and ate breakfast before disembarking, so didn't have a great pick on the beach for our spot since a lot of the best seats were taken. We thankfully found a decent spot with a little shade and then we went snorkeling. 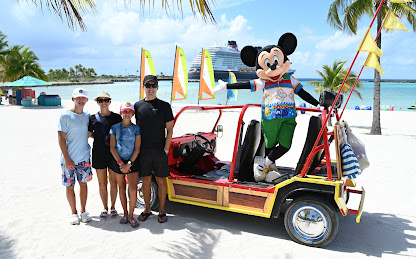 It's been a long time since we snorkeled at all, much less at Castaway Cay, so it was a fun and novel experience for us. The water was nice and warm, and it was probably my favorite part of the vacation. There were lots of things to see and we saw some large stingrays and fish right away. The best part of snorkeling there are the neat stuff that are marked with big red or white floating markers. There were all kinds of things like a small boat, a statue of Prince Eric from "The Little Mermaid", the door from Monster's Inc., a submarine from the old Disney World ride "20,000 Leagues Under the Sea: Submarine Voyage", a Dumbo ride vehicle, and all kinds of concrete structures to provide habitats for fish and coral. Andrea and Connor decided to go in after quite a bit of swimming, but thankfully Paige wanted to stay out and we explored around until we were sure we'd seen everything.
After snorkeling we went to the Cookie's BBQ for lunch and then Andrea and the kids went back to the Wish. I decided to stay out and went for a long walk, but had to turn back earlier than I'd wanted to since a thunderstorm was coming towards the island and I didn't want to get struck by lightning. 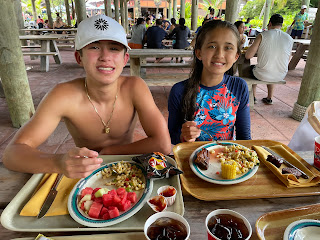 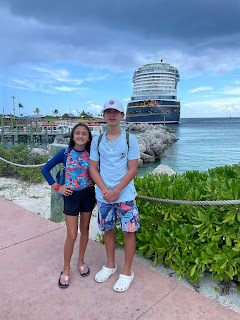 Dinner on Sunday was in the new Marvel themed restaurant. While we ate, Ant Man and the Wasp did a demonstration for us, which eventually caused problems and the boat was attacked by robots. Thankfully they were able to fight them off with help from Captain America, Ms Marvel, and Captain Marvel. After their battle they came through the dining area to say hi. 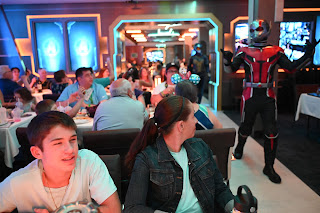 After dinner, Connor and I went back to the room to finish watching the Cars movies. Andrea and Paige got icecream from "Joyful Sweets" and sat out on the deck watching a movie while they enjoyed their dessert. 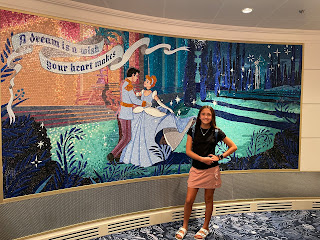 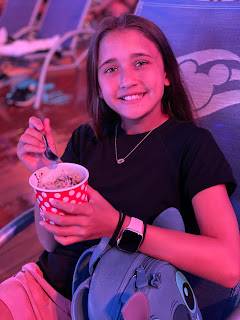 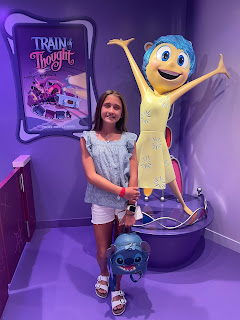 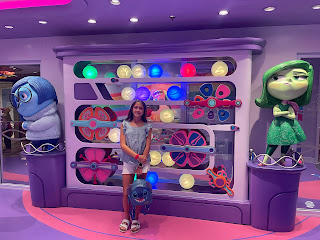 That was pretty much the story of our cruise! Overnight on Sunday I developed some pain in my upper chest and lower throat. I was thinking it was acid reflux, but it'd been years since I had any problem with that, so I decided to go to the health clinic just to be sure. They ran some labs and an EKG on me to be sure it wasn't a heart issue and thankfully everything came back ok. I took some Tums and after a couple hours I went back to the room and was able to sleep. 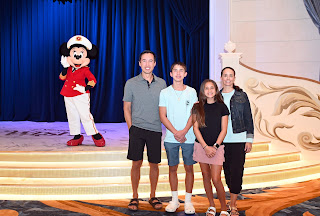 We disembarked early on Monday morning and were home in time for me to work a full day. It was a fun, albeit short cruise, and we loved the new boat.
Posted by Shawn Vernon at 7:13 PM