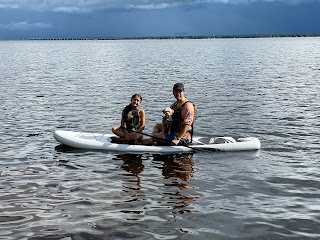 I got a SUP last week and on Friday when we dropped Paige off at the Goble's house for the weekend we brought my SUP over to try out on the river. It's been raining every day and there was a small window of time that it looked like we might get a break in the clouds so I inflated my SUP and dropped it in the water at the kayak launch. Paige and Millie rode around with me for about five minutes before we heard thunder in the distance and the clouds darkened the sky and ruined our fun. It was peaceful and pretty on the river and Millie liked jumping in and swimming around with me. Amanda heard a story about a kid that had a gator try and jump in his kayak recently, so we're not sure if we'll be SUPing on the river in the near future, but we'll see.

On Sunday I took Millie and the SUP to the beach. Even though it was only a yellow flag, the waves were difficult to deal with and after we fell off the second time Millie swam back to shore and we gave up. I don't think the SUP in the ocean is going to work unless it's a super calm day with no waves. 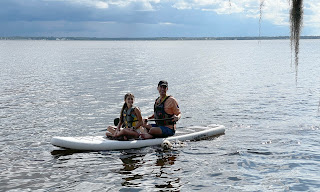 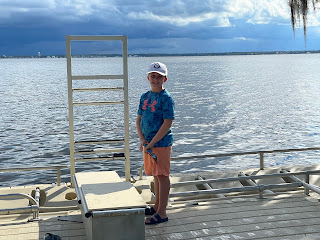