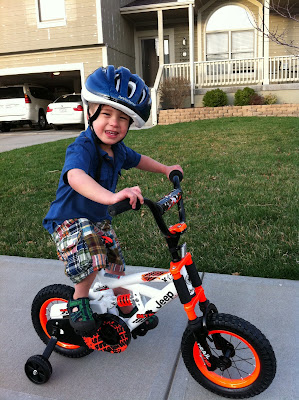 Connor's been trying to ride his bike lately. He really struggles with the continuous task of keeping the pedals rotating in the right direction. He'll often get them part way around and then stomp on the wrong side and will come to a screeching halt. He's starting to get the hang of it and we went partway down the sidewalk tonight. It's a tiring chore for him still, but I think he's starting to like it.

Ignore the house in the background! More on that in a future post.