My weekend with the kids while Andrea was away 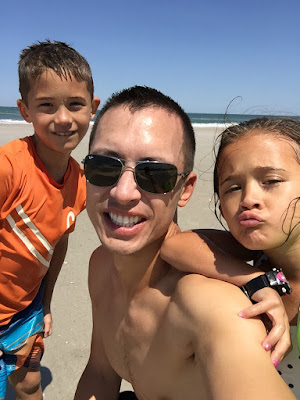 While Mommy was out of town, I decided to do some fun stuff with the kids. On Friday, we went to the new house to check out the progress and to kill some wasps.

Connor took the video. I gave, what turned out to be, a very dumb sounding explanation for how the wasp poison worked. The kids hate wasps (so do I), so it was pretty entertaining to blast them and see them die.

Afterwards, we went on a picnic with Logan to St. John's Golf and Country club. We packed some chips, fruit (Connor loves strawberries recently), and stopped by Burger King for some yummy stuff.

On Saturday, we stopped by the new house and brought some fragile stuff over and did some work around the house. Then, we went to PVIC and to the beach for a bit. We walked way down the beach and played in the water. It was actually a little cold, so the kids really liked splashing around in some of the tide pools, which were heated up a bit by the sun. During our walk on the beach, we'd play a "Syria" game that Connor came up with. I would pretend to be the forces loyal to Syrian dictator Bashar Al Assad, and the kids would pretend to be FSA forces. I'd chase them down the beach with a rubber football and would pretend to be a Syrian fighter jet dropping bombs on them. Kind of a bizarre game, but I've talked about the Middle East with the children on a few occasions, so somehow it made sense for Connor to come up with it I guess.

I took a video of the kids splashing around in a tide pool, and then took a selfie with them.

I'd really kind of wanted to go for a jog on the beach, so on the way back I suggested a challenge for them. I told them that if they could jog without stopping, all the way back to our beach bag, I'd buy them whatever they wanted for dinner and would also give them each $10 to spend at the store. They obviously jumped at the challenge and we started our jog. I had to moderate their enthusiasm at first, and set a reasonable pace. I estimated it was about a mile run to the beach bag, and I really didn't expect either of them to last, but they both did it. I was pretty impressed, and I was happy to fulfill my part of the bargain. Connor wanted 2 cheeseburgers from McDonalds, and Paige got a Happy Meal. They both earned it.

Afterwards, we went to Toys R Us and they picked out their goodies. Connor found $8 worth of football cards and Paige couldn't make up her mind on what to get. Connor generously suggested that he would give her his leftover $2 to spend and Paige was able to get everything she wanted. Connor is such an amazing big brother. He plays so nicely with his little sister and is so sweet to her. She adores him as well. I truly hope they always stay so close. 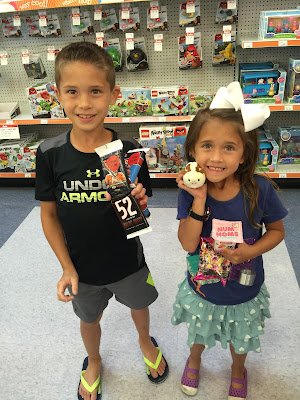