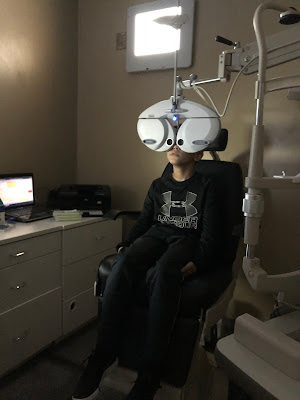 Connor's eyes have been a little nearsighted, but not quite enough to do anything about it until recently. The school did a vision screen and recommended he get screened by a doctor. We took him to Costco and they did the whole vision test routine as well as dilating and looking inside his eyes. His eyes are healthy, but he has -1.25 on the right eye and -0.75 on the left. We picked out a pair of glasses and also wanted to have the option of contacts. Unfortunately, Connor really struggled with the contact lenses. The doctor was able to get them in fairly easily, but Connor's very sensitive with his eyes and he struggled to even get his fingers anywhere near his eyeball. As soon as anything made contact with his long eyelashes, his eye would reflexively close up. 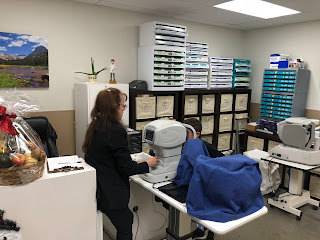 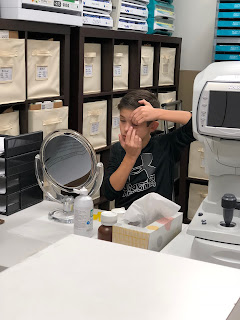 At the eye doctor's office, we were only able to get the contacts in and out if someone else did it for him. We've been working on it this past week and it's getting easier every day. Connor's actually gotten to the point where he can get the contact out on his own, but we're still helping him get them in. Hopefully soon he'll be able to do it all by himself.

We took a video on the first night when we were working on getting the contacts in, just so he could see how his eye wasn't open enough to work with.