On Saturday, April 3rd 2021, the kids participated in a Level 7 tournament. It was super convenient since it was in our neighborhood. Connor played first and his first match started at 8am. I brought him to the tournament and brought Paige up so she could start at 11am. 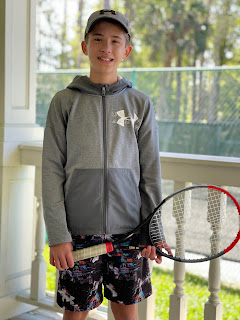 Connor was successful for his first three matches and although he didn't feel like he was playing his best, he won them. His fourth match was against his buddy Charlie and they split sets 1-4, 4-1 and then did a 7 point tiebreak to decide the match. Unfortunately Connor fell behind early in the tiebreak and a few close shots hit the net. He lost the match, but had a great day of tennis otherwise. Andrea took over tournament parent duty once Connor finished, and I took Connor to lunch.
Paige's group started at 11, but unfortunately Paige had a bye the first round. Personally, I think that's the worst time for a bye since everyone else has a match and get warmed up and then Paige has to come in cold and play someone that just finished playing an entire match. The format also didn't favor Paige since it was a single set to 4 games, which doesn't give any opportunity for a reset and regrouping if you fall behind.
Paige lost the first match, but then won the rest of her matches and finished in second place overall. She got very frustrated in the first match of the day, but we're proud of her for getting it together and focusing to play well afterwards. 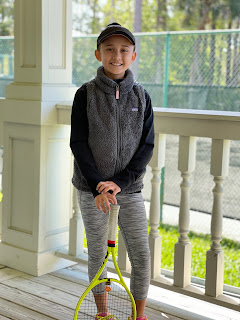 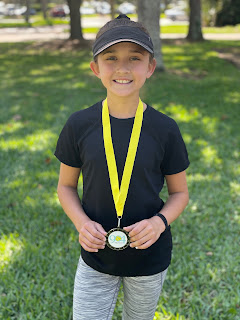 Paige's friend Yasmine came to the tournament and afterwards Andrea took the girls to Barbara Jeans for lunch.