We wanted to display Connor's treasure trove of Cars cars. They're from the Disney movie Cars and they're his favorite kind of toy in the world. He got a few earlier this year and they've recently multiplied like crazy after he broke his leg. He's always saying "I play car". Since he broke his leg he likes to sit in his chair and play with them on the table or during tummy time he'll play with them on the floor. The Grandmas, Aunts and Uncles have gotten him even more. This picture doesn't quite show all of his, some are under furniture or something, it's hard to keep track of all of them since he takes them everywhere. 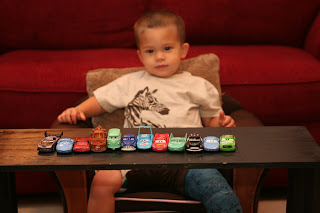