Connor's doing great! He had a check up today at the Ortho clinic at Children's Mercy and everything was healing up well. Actually, according to the X-Rays, the bone's completely healed at this point, but they want to keep the cast on for a couple more weeks just to be safe. We would love to get the cast off early, but would NOT ever want to have to put it back on, so we are fine with being safe.

The doctor was talking with the resident and said that for most kids they take the kid's age, add 2 and that's how they figure up how many weeks to leave the cast on. Connor is scheduled to get his off October 6th, which will be a little over 5 weeks. Our backs can't wait to have him out of it!

The doctor showed us some X-Rays and there's a big glob of new bone surrounding the break. It should be very strong, and as Connor heals the glob will go away and you shouldn't be able to tell the bone ever break. Apparently bones don't scar.

Here are the X-Rays from today's appointment: 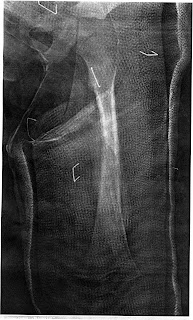 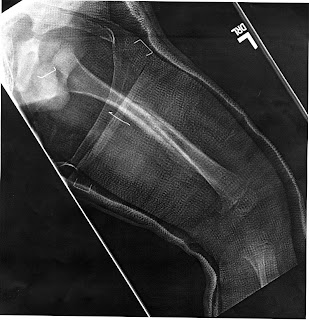 In this picture, I put a thin red line along side the new bone that's grown around the break: 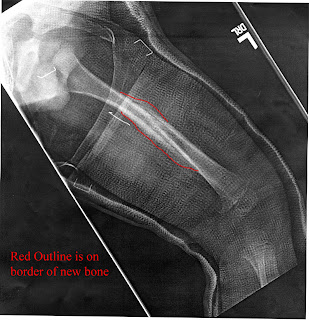