Living with the cast 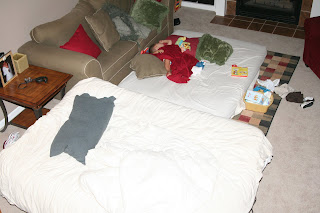 Living with the cast is pretty difficult, but we've adjusted to it as best we can. Connor needs a lot of room to successfully roll over and adjust his position at night and he was pretty cramped inside his crib. When the Grandmas were watching Connor, they put the futon mattress on the floor and that has worked pretty well. Although the Grandmas were able to sleep on the mattress with Connor, he is out of control squirming, shifting and kicking at night. The right leg, which isn't enclosed in the cast, never seems to stop moving. Grandma Genie says that it's making up for both legs.

We couldn't get any sleep if we tried to sleep in the bed with him, so we set up an air mattress next to his bed and that's worked well. We thought about just setting up a monitor and going to check on him from time to time, but he gets wrapped up in his blanket or stuck halfway through a roll many times during the night. It's easiest just to stay close at night. He's done well with the mattress, he stays on it at nap time and bed time and he enjoys having us close.
Posted by Shawn Vernon at 1:19 PM