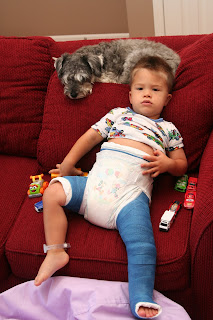 Today we tried to work out the best way to live with the big Spica cast. It's a difficult cast to live with since it's frozen Connor somewhere between a sitting and standing position. He can't exactly sit without being laid WAY back and he can't really lie down very comfortably either.

The first part of the day we propped him up on the couch when he watched his Elmo DVD and Seasame street. He could put some of his cars on the couch's arm rest but he couldn't really play with them like he wants to. 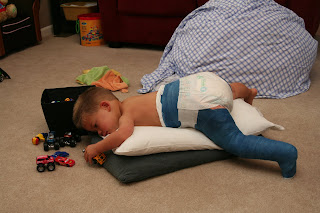 We did tummy time for a while, which was good since it was a different position, but it was not very comfortable for very long. He had to have pillows under his chest to keep his toes from digging into the ground and then couldn't hold his head up well or reach the cars very well. 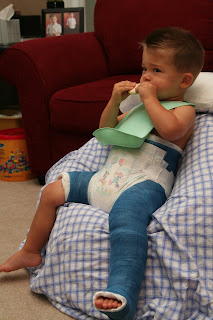 The best overall position is sitting in a bean bag. We put a sheet over the bean bag because we haven't taken the tag off yet and don't want to get it dirty in case we find a more manly color and decide to return it. Connor whined a lot at first when we put him in it, but he is able to sit up properly to eat. Unfortunately there isn't much to do when sitting in a bean bag.

Last night, when Daddy bought the bean bag, he kept his eye open for some kind of a table for Connor to use. Unfortunately, Walmart and Target didn't have anything at all that would work. I put Connor in the bean bag today around noon and measured the dimensions, then put together a little table that was custom fit to his bean bag and to him.

I spray painted it black so it wouldn't clash with Mommy's decor and while the neighbor girls were visiting we gave it a try. So far, it seems to be a hit. He's able to reach everything on it and it's a perfect height for him. We're really hoping he'll be able to use it for eating, playing, reading, etc.

He had some big smiles while playing cars for the first time in days. It was great to see him smiling and enjoying himself again. 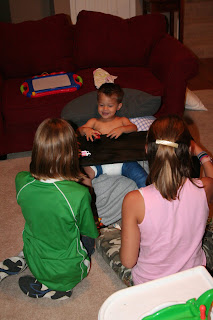 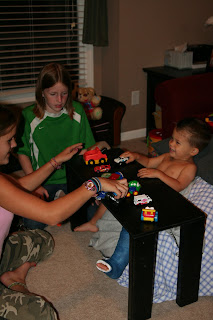 Overall today we just focused on making Connor comfortable. We did get out early in the day and had to take Connor to the Ortho Clinic at Children's Mercy. The cast on his left leg was put together in two sections, one above the knee and one below. Apparently they didn't bond very tightly and he was able to move the area beneath the knee very slightly. Everything's got to be stuck tight, so there's no movement. The clinic was very good about just getting us in with no appointment. We didn't have to wait at all and a nurse practitioner just wrapped the area where the two cast pieces joined and it solidified that area so it won't move.
Posted by Shawn Vernon at 9:15 PM