Sissy around the house

Sissy's such a hoot. I was telling Andrea the other day that aside from her, Paige is the only other person that I can like so much and irritate me so much all at once. Both extremes with these two. Paige can be so sweet and funny, and then a few minutes later will just decide she's angry and will shriek and howl until she's worked herself up in to a sweaty, tear filled, runny nose mess. Then, when she decides she's done, she'll just stop crying and will be on to something else. With forgotten tears still dripping down her face, she'll be laughing and playing with something new.

I decided I'd just write a fun post about her, with no particular theme in mind, just some things she's been up to recently that hopefully will capture the essence of little Sissy.

Here's Hop and Boo. They should probably get their own post they're so important. Connor's got Li-Li, a half-blanket half-animal that he's loved since he was a baby. Paige got two of them. A rabbit and bear. She carries them around and loves them equally. A couple weeks ago we were talking about them and I held up the rabbit and asked Paige what her name was. I was pretty surprised when she said "Hop". I asked her the bear's name and without hesitation she said "Boo". So, those are the names! 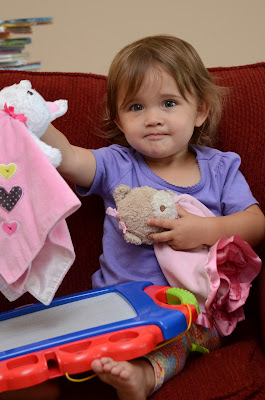 I got a video of her talking about them.

I liked this next picture, she's in the middle of saying "Hop" when I snapped it. What a cute face! 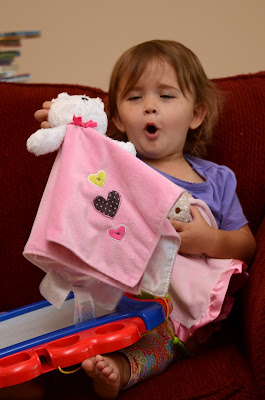 Sissy loves the outside covered lanai in our rental. I didn't even know what a lanai was until I moved to Florida. With the weather down here being so mild and cool, we've used the lanai a lot and we all love the lanai, but Sissy definitely loves it best. She always asks to go outside when the sliding glass door that leads to the lanai is closed. She plays with all kinds of riding toys, strollers, and just looks out the windows at everything. The other day, we were sitting out in the lanai when rain started pouring down. I got a cute picture of Paige watching it all and a short video too. 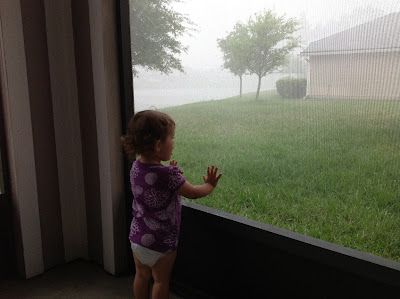 Paige loves her food and is a great eater. We've been letting her feed herself more and more, but she's still such a mess when she eats. I love sitting with her and talking to her while she eats. She definitely enjoys her food and although she takes enormous bites occasionally, she actually takes her time. I think if it was up to her, she'd snack constantly all day long. 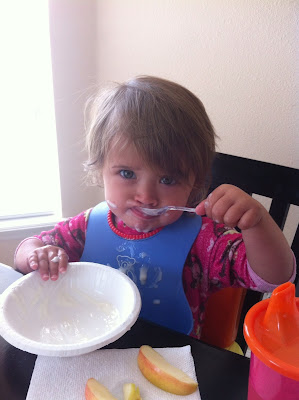 Here's a short video where I talk with Paige in the morning during breakfast. Nothing too exciting, but I love these moments with her.

Lastly, I'll talk about her Nuk's. She loves these things and has a ton of them. She actually had strep throat this past week and we had to boil them all to kill any germs on them. It was funny seeing them all boiling in a pot together. We had about a dozen. We try to keep her from having them except in the car and at bedtime, but she is persistent and always manages to find some around the house. Recently, her favorite thing to do with them is to put one in her mouth, then hold another up to her nose and sniff it. She apparently loves the smell of them. We'll be riding in the car and can hear her in the back seat sniffing away the whole car ride. I asked to smell one once and she held it up for me. It smelled like old spit and rubber. Gross. I don't know what I was expecting, I suppose I should have guessed. 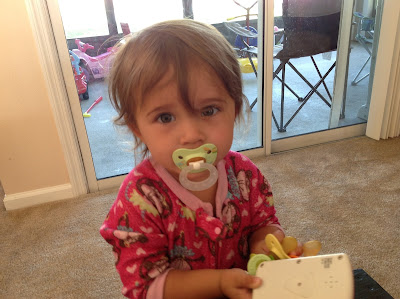