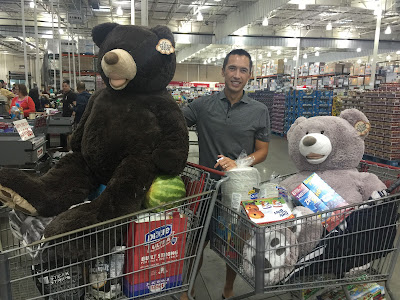 Andrea and I went out to dinner and to Costco afterwards like we do on Fridays when we can find a babysitter. While at Costco we saw the giant stuffed bears for sale and couldn't resist. They were only $30 each, and initially we decided to just buy one. A little while later Andrea was asking me how we'd decide which kid got to have the big bear in their bed. I broke down and decided to just get one for each.

Andrea took a video of us giving the bears to the kids. We decided to give Paige the grey one since it matches the colors in her room a bit better. Connor named his big bear Inferno at first, but then changed it to Longshot after some Youtube guy he watches. Paige named her bear Laura.