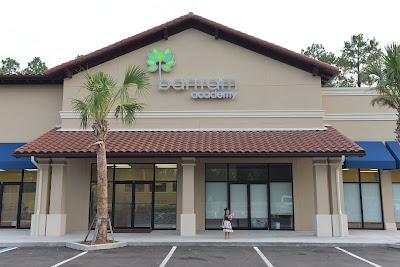 Friday, August 7th, was Paige's last day to go to Bartram Academy. She finished VPK (Voluntary Pre-Kindergarten), but still went to Bartram Academy over the summer to their summer camp. The school has become so familiar and such a part of our routine. It's going to be strange that we won't be seeing so many of the people any more and we won't be going back there again. Paige might go to summer camp there in the future, but you never know for sure what the future holds.

On her last day, I brought my camera and she brought some cards that she made for her favorite teachers. She had me draw lines on folded pages and then she cut them out and Andrea helped her spell out her messages to everyone. We snapped a picture out in front of the school and one out by the playground before we went inside. 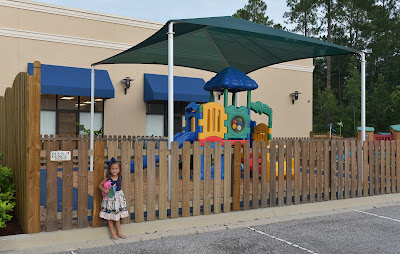 Once inside, we snapped a few pictures with her teachers and with the front office lady Amanda. 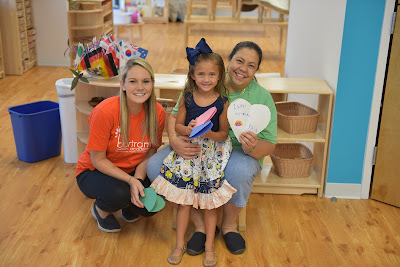 Amanda was always very sweet to Paige and would often compliment Paige on her pretty dresses or outfits. 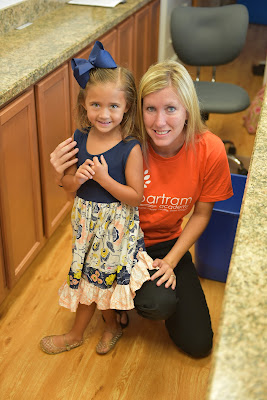 Bartram Academy was our favorite school that we enrolled either child in. They always did a good job keeping it clean, they served fresh organic food with a great variety, the teachers were always friendly and positive, and Paige enjoyed it very much through the years.

Probably the biggest change for me will be my change in routine. For 8 years now, ever since I went back to work after Connor was born I would drive a child in the morning. I took Connor to multiple in-home babysitters and then to multiple preschools. With Paige, I've been driving her to Bartram Academy for so long, and the drives have always been memorable. When she was very little, there were some rough mornings where she would literally cry for the entire 10-15 minute drive. More recently the drives have actually been very enjoyable and it's been a fun opportunity for us to talk, tell stories, and learn things. Paige liked talking about the GPS in the car, the animals we'd see, a tree that was knocked down by a drunk driver, how nature works, and all kinds of things. Her favorite thing to do, if I was in the mood for it, was to tell stories. She would usually pick 3-5 random things and then I'd make up a story and would include everything she picked. In the last few months she's actually gotten quite good at telling stories and I would pick some elements and she would fit it all together in to an imaginative story.

On our last day, I decided to record the drive. I rested my elbow on the armrest, pointed my phone back at Paige and hit the record button. I couldn't really see it while I was driving, but I watched it and was able to keep her in the picture pretty well. We reminisced a bit about our drives and talked about some of our favorite things. As much as I will be happy to have an extra 30 minutes each morning where I don't have to drive Paige to school, I will miss our special time together. I am surprised at how emotional I get when I think about it.

Endings and new beginnings. Such is life. Nice to capture them like this. Hope Connor and Paige like their new teachers and classmates. I know they'll do well.