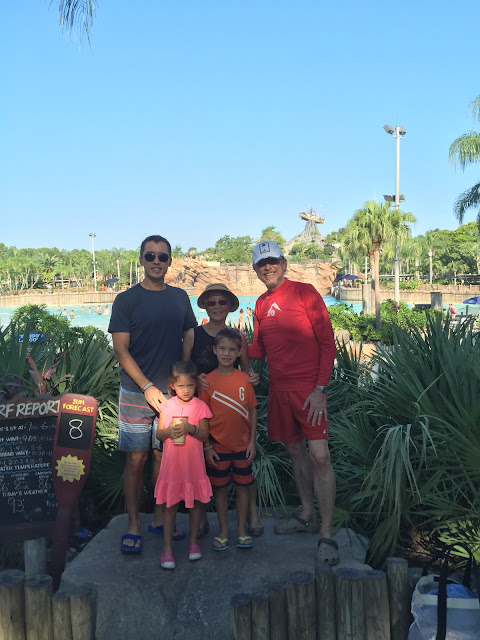 This weekend I went with Grandma Alice, Grandpa Rick, Connor and Paige to Orlando for a fun weekend getaway. We stayed at Disney's All-Star Music resort in a suite together and went to Typhoon Lagoon on Saturday.

We arrived in town on Friday night and played around at the resort for a little while before bed. There was a playground and an arcade that we had to try out. 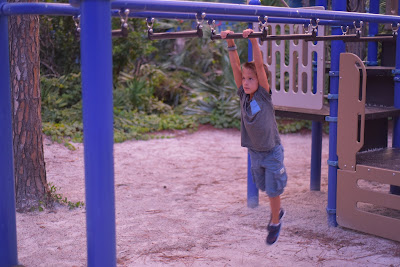 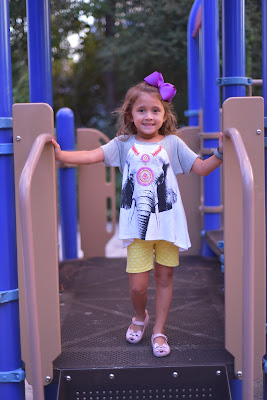 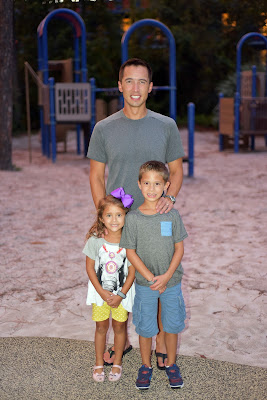 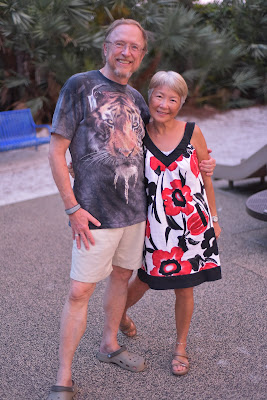 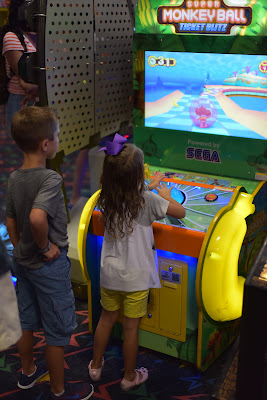 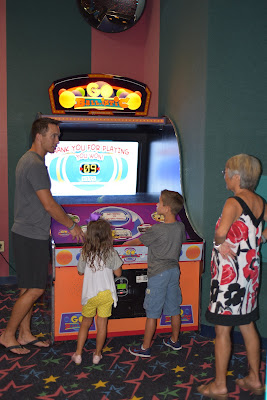 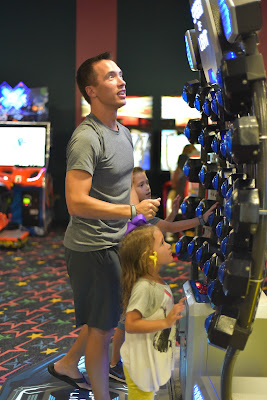 In the morning we got up and had some breakfast at the resort and then we went to Typhoon Lagoon. 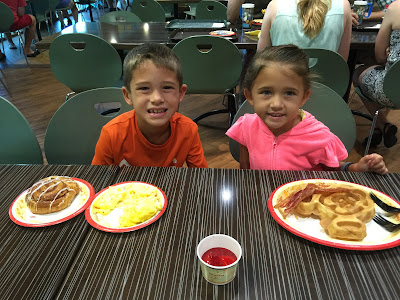 The water park was pretty large and sprawling and in the middle was the neatest wave pool I'd ever seen. Every 80 seconds a gigantic wave would form against the back wall and make its way down the pool. The wave was so powerful I was a little nervous at first, but once it swept past everyone would have over a minute to catch their breath, find all the hats and glasses that were pulled off, and any lost children. Connor thought the wave was the best part and we spent a lot of time out near the deeper end where the wave was highest and the crowd was thinnest. Paige liked the wave a little bit, but the one time I took her out near the deeper end she didn't hang on very well or listen like I wanted so I didn't want to risk it. 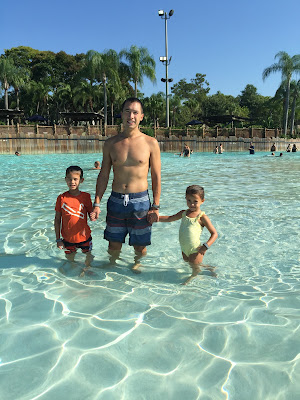 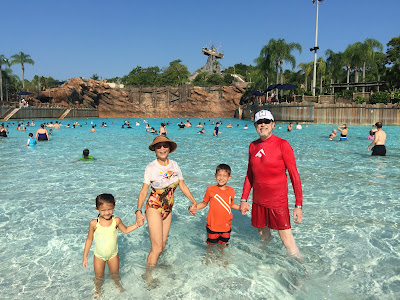 We took a couple videos with my phone in a waterproof bag, but didn't venture too far out with it. Grandma's video was one of my favorites because the wave swept her off her feet and she had a heck of a time keeping the phone out of the water. Unfortunately the wave swept her off her feet a few times and she was pretty scraped up by the end of the day.


Grandpa Rick brought his waterproof camera out to the deep area and got some nice videos up close where you can see the wall of water approaching and washing him away. Poor Grandpa lost his hat to the wave half a dozen times, but thankfully always found it. Grandma Alice kept her hat through the waves, but somehow lost it at the end of the day. She was sad her hat, which she's had a long time, was lost.

No day with Paige is normal without a little bit of drama. We were getting lunch and I was filling up a cup with soda when I heard her shrieking "MY TOE! MY TOE!". There were a bunch of bees buzzing around the spilled soda and apparently Paige had stepped on one and it stung the bottom of her right foot. I carried her to our seats and was able to see that most of the stinger was out, but there was a little bit stuck under the skin. I carried my howling daughter through the park to the first aid station and they had some tweezers and tools at the ready. Unfortunately Paige was squirming and the nurse on hand wasn't very steady, so I took over and was able to get the stinger out while the nurse talked to Paige and distracted her. It was very dramatic and later on while we were on the lazy river a lady asked Paige if she was the one that hurt her foot. I think half the park heard it.


Paige's favorite part of the day was the little kiddie area. There were some water guns, small slides, and a small waterslide with yellow rafts. Paige called it the "Little Lazy River", but it was a medium speed slide really. Grandma was very sweet about staging rafts for Paige so that Paige could run back up again and again. She probably rode it 30+ times.


We all liked the lazy river, which circled the park. It was a little difficult staying together very well, and crowded at times, but it was a nice relaxing way to get around the park. 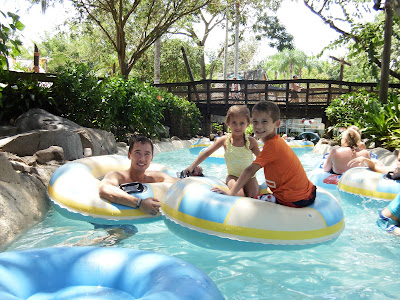 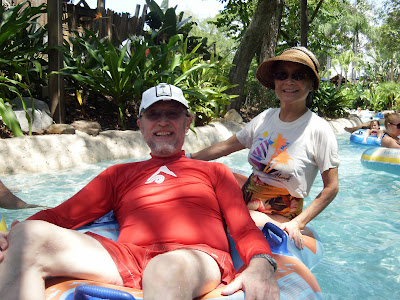 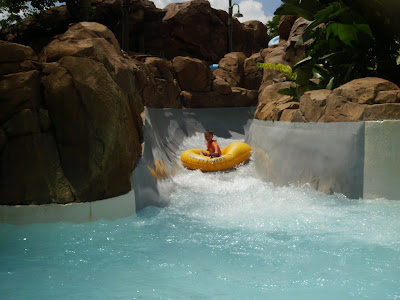 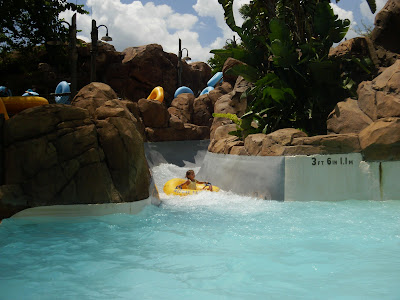 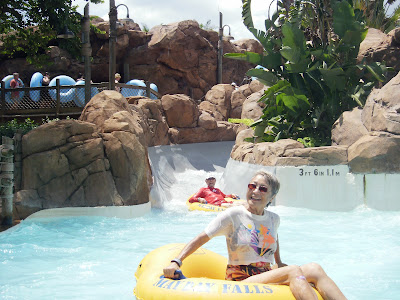 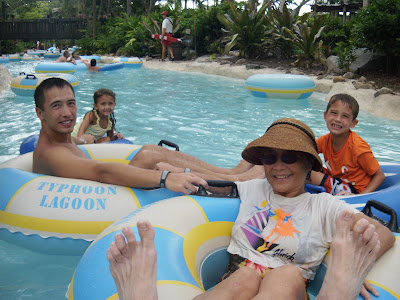 It was a fun weekend and I'm glad we were able to go with Grandpa and Grandma and have a fun adventure together! 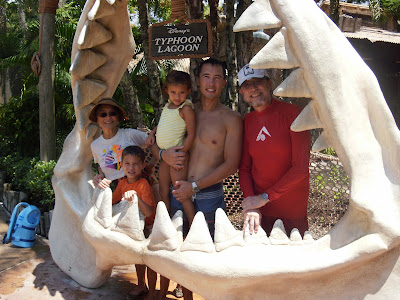 That was a really fun day. Have to do it again sometime.