ICE! at the Gaylord Palms resort 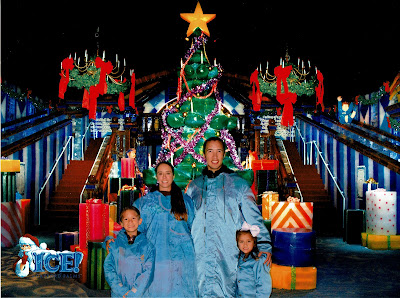 Andrea reserved a room for us at the Gaylord Palms for the weekend in Orlando and also purchased some passes to see the ICE! exhibit. Saturday morning, we got up and did some shopping at the outlet mall, then ate lunch and returned to the resort. We saw a bunch of cars pulling in to the resort for the ICE event, so we decided we'd better go do it before it got too busy. By the time we arrived, it was already super crowded. There was a long winding line to get in, but thankfully the tickets Andrea purchased allowed us to skip the lines and go straight to the spot where they were handing out the enormous blue overcoats. We put on our coats, took a picture in front of a greenscreen (which they later photoshopped together) and then we were eventually let in to the 9 degree ICE hall. Everything inside was setup to tell the story of the night before Christmas and there were huge colored ice sculptures everywhere. It was uncomfortably crowded at first and hard to get any pictures near anything, especially since I only had my 50mm lens and no wide angle. 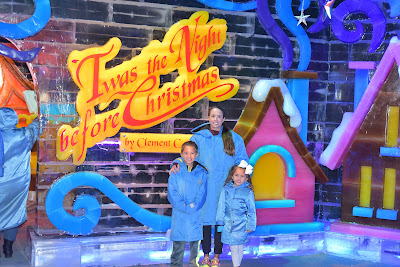 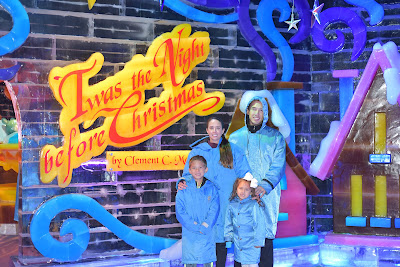 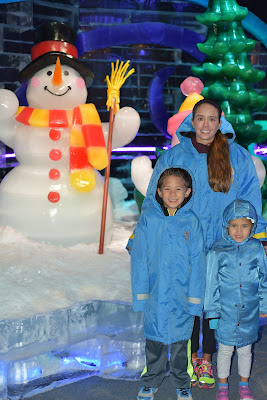 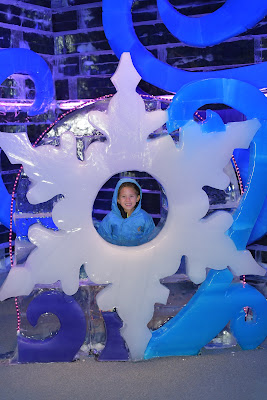 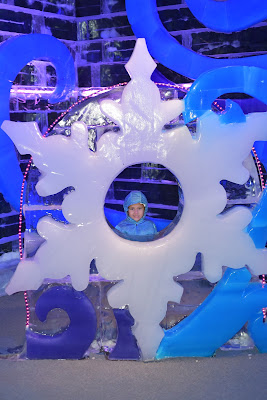 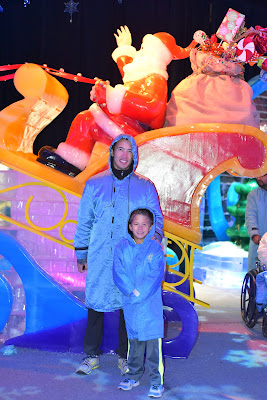 After going through and looking at things for about 5 minutes, Paige was done. She was shivering, sniveling, and shaking. Connor didn't seem to mind it at all. I kept having to tell him to put his hood on to keep his warmth in. We got to a big open area with 4 ice slides and decided we'd wait since the lines didn't look too long. Unfortunately looks can be deceiving. 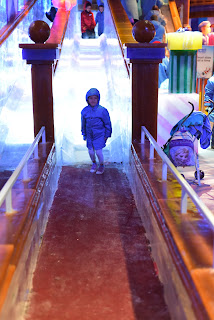 Paige was too short for the big slide, so when we got about halfway up she went down the kiddie slide. Then, Connor and I had to wait about 15-20 more minutes until we had our turn at the top with the big slide. For some reason people were taking forever with the whole thing. The ice slide wasn't particularly slippery and I actually had to use my feet to scoot my way down. Poor Paige and Mommy were down at the bottom freezing their booties off and we didn't think the slides were really worth the wait. 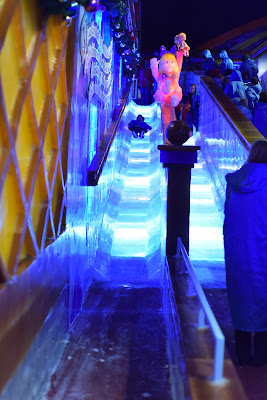 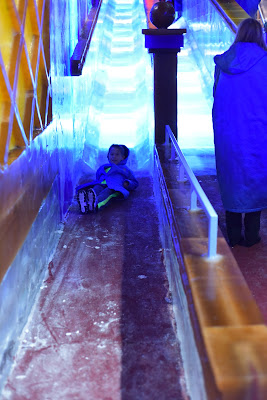 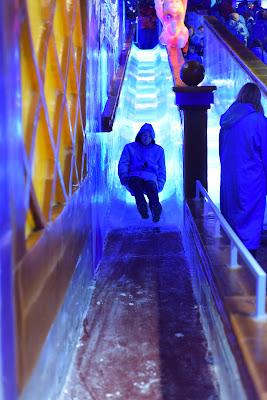 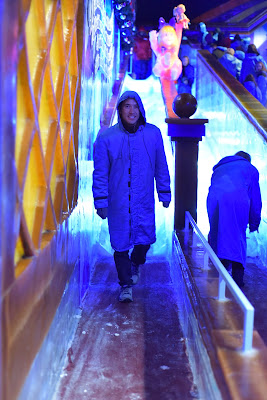 After the slide area, we saw the most uncrowded and pretty sculptures in the area. This area was almost deserted because by the time most people were done waiting on the slides they were too frozen to stick around and look at anything else.

We snapped just a few pictures of some of the colored pieces, but the nativity scene and angels, made out of crystal clear ice, got skipped because we were just too frozen to wait around any longer. 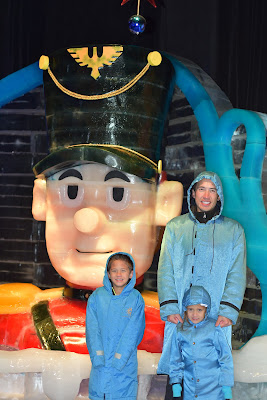 Finally, we left the ICE hall and were able to warm up. We waited in another line to do a gingerbread house and I snapped a pic of the kids on the big ICE! sign. 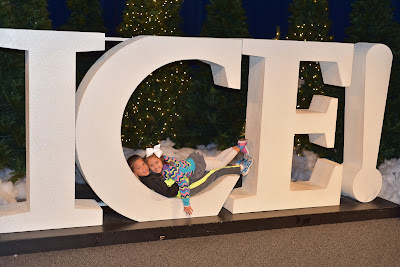 The gingerbread house decorating was very fun and easier than we'd expected. The house itself came pre-assembled and we just got a kit filled with icing and candies and we stuck everything to the house together. Connor and Paige both ate some of the good candy and we stuck a bunch of pieces all over the house. We did have to decorate and assemble the chimney, which was pretty complicated. I think Andrea and I enjoyed it the most and we did the majority of the work. 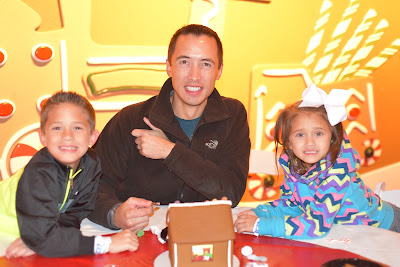 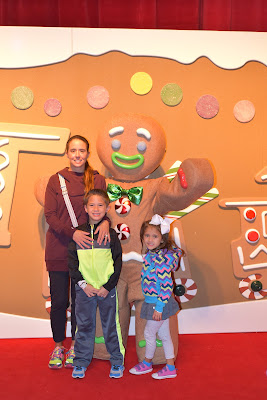 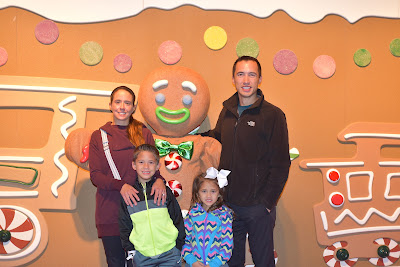 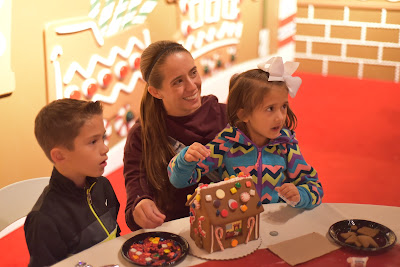 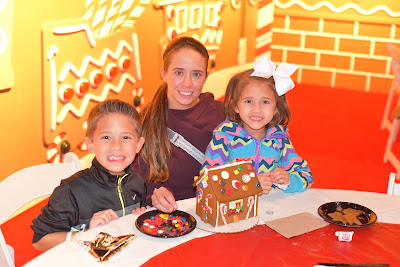 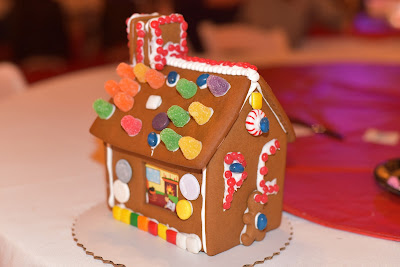 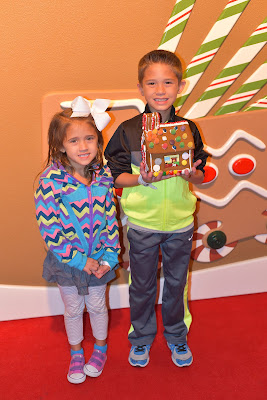 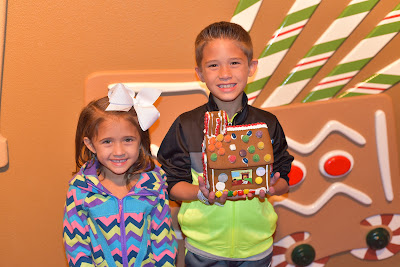 We took our masterpiece back to our room, then went on an "Elf on the Shelf" scavenger hunt around the property. They had hidden Elves all over with very ambiguous and confusing clues to help you find them. The clues were often vague and referred to parts of the sprawling property with words like "lagoon", which weren't marked anywhere on any maps and could refer to many of the water features. We cheated and asked some other people, but many of the other people were even more confused than we were. Andrea and I ended up doing most of it ourselves, although we did make Connor do some of the reading and problem solving too. 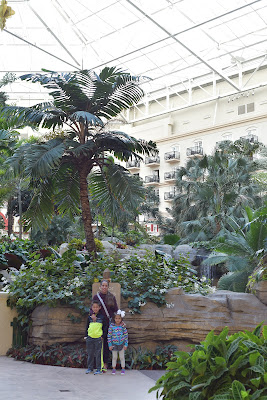 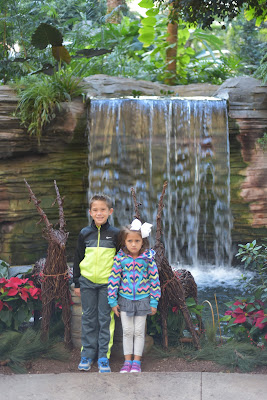 It really was a nice excuse to wander the property and see everything. The resort is much bigger than we'd expected and it was definitely well kept and beautiful. 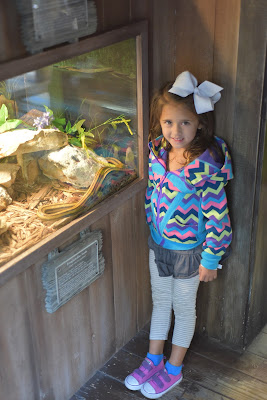 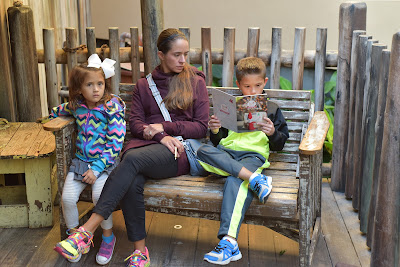 After we got done with our scavenger hunt, we ate at the sports bar that was on property and then watched "Home Alone" like we do every year. Paige and Andrea drifted off to sleep, but Connor and I watched it all. Mommy did wake up for the ending, but I don't think my Paigie watched even half of it this year. It was a fun day and made us excited for Christmas!
Posted by Shawn Vernon at 5:51 PM

Interesting place. Never heard of it before. Looks like you had fun.