The conclusion of our Odessa trip

The rest of our trip to Odessa was fairly quiet. After the football game and mani-pedi trip, the kids stayed with the Rudolphs on Sunday night. On Monday, freezing rain changed to sleet and the sleet eventually changed over to snow. The roads were a mess and Andrea and I didn't leave Genie's house the entire day. We watched "Making a Murderer" on Netflix and hibernated. 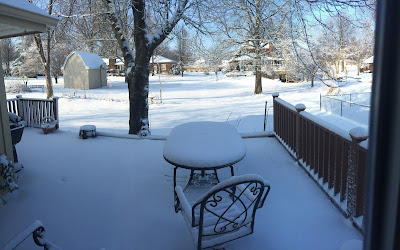 On Tuesday, the roads were passable and the Rudolphs brought the kids back to Odessa. We kept wondering if the kids would ask to play in the snow, but it was very cold out and neither one had any interest.

Wednesday morning we got up early and Amanda drove us to the airport. Although there had been lots of delays throughout the week from the snow, and although Atlanta had been experiencing delays that day due to thunderstorms, our flights were on time and went well. The kids were both wonderful on the flights. Connor watched some reality show "Chrisley Knows Best" with Andrea and Paige sat with me and watched some Disney shows. I remember dreading and stressing about flights in the past, but the kids are so easy and well behaved now, it's actually pretty relaxing to fly. After we landed in Florida I decided to get a quick pic of Paige by the window. She had liked looking at all the clouds when we were above them and picked out lots of different shapes in them. 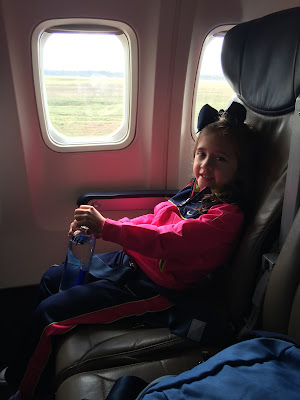 It's good to be home in Florida and hard to believe the difference in temperature. On the way home from the airport we stopped at ate at Cantina Laredo and sat outside in the 80 degree weather. Everyone around us was wearing t-shirts and shorts and flipflops. I had dressed for the cold and was starting to sweat in my thermal underwear, long socks, and sweatshirt.

It was a nice change to be in the cold weather for a week, and we all enjoyed getting to see Genie, the Rudolphs and Gobles.