On Sunday, I played for the Men's singles Ultimate Tennis 3.0 level championship.

This was my second season doing Ultimate Tennis and it's always a pain in the butt to get matches scheduled with other men that are busy with work and family. I was only able to get 3 games scheduled during the "regular season" out of 7, and my record wasn't a very good 1-2. I improved quite a bit by the end of the season and since most of the guys in the league weren't available to play in the playoffs, I got the #4 seed spot although I was ranked about #8 or #9 overall. Right after Thanksgiving, I played against the #1 player who was 6-1 and won so I was scheduled to play against the #2 player on Sunday.

Andrea came back from her girls' weekend a bit early, so she came to the match to watch. The weather was pretty stinking hot out and I was a little nervous getting started because Andrea was watching and because my opponent brought five family members to watch him play. I had actually played him earlier on in the year and he'd beaten me 4-6, 6-4, 4-6. I didn't expect to win, but started off pretty well and won the first set 6-3. The second set started a little rough and I lost it 3-6. We took a break after the second set and I took a little time to talk to Andrea. She gave me some important pointers and gave a few suggestions on different strategy. Importantly, she noticed I was too far up in the court much of the time and was taking a number of balls to my feet. I adjusted my game and won the third set 6-0.

I was pretty thrilled with the win and it was a nice validation that my tennis game is improving. 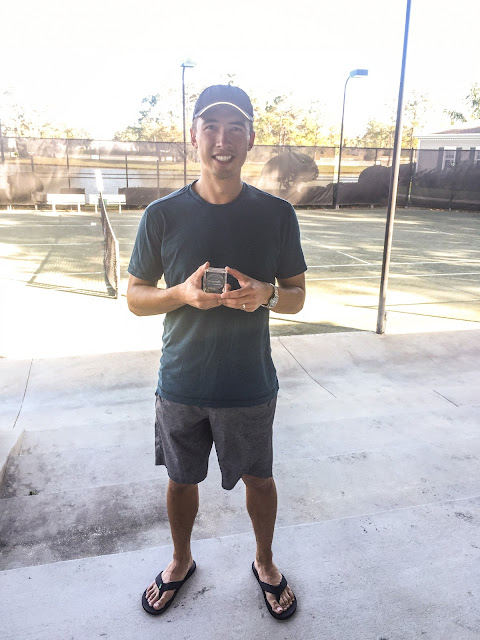