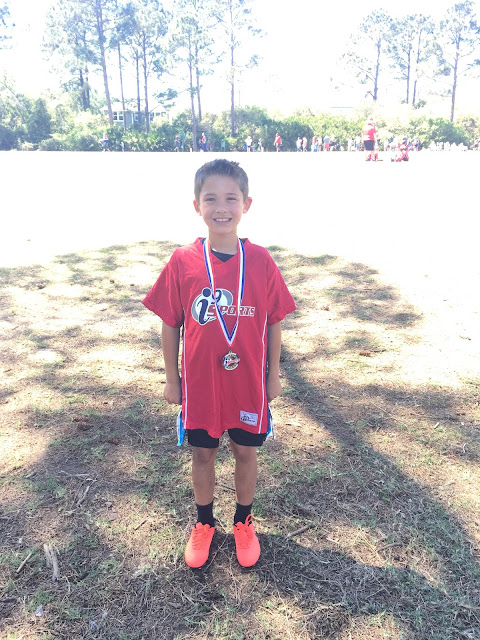 Connor started on his new flag football team this past week. He had his first practice on Wednesday, then his first game Saturday afternoon. Connor had a rough time with his basketball team, so we were pretty happy after the first practice and he thought his team had some good players. Andrea had heard the coach was a good one from one of her tennis buddies and had requested him, and so far we've been impressed with the coaching and the kids.

At the game Saturday, Connor came out ready to play. The other team started with the ball, and Connor started on defense. The first two plays of the game, he was the one to pull the flags and he was off to a great start. Although the opposing team scored a couple touchdowns, Connor's team was too much for them and they won 32-13. Connor played on offense for a number of plays, but they only went to him once on a fake reverse. Connor crossed behind the quarterback and faked a handoff to another boy running across the opposite way. He kept the ball, ran down the sideline, and scored. I was glad he was able to do well when they gave him the ball.

After the game, they gave out two MVP medals and Connor got one for playing such strong defense and for scoring his first touchdown. Great job Connor!
Posted by Shawn Vernon at 7:51 PM