Principal for the day - Paige! 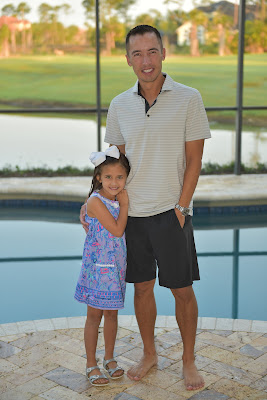 On Wednesday, I took Paige in to school early so she could be Principal for the day. Paige has been talking about it all year, and working towards this goal. Early in the school year she told us that if she earned 120 points by reading books in class and taking online quizzes, she would get to be principal of the day. Last week we received a letter that she'd fulfilled the requirements, and that on Wednesday we should have her dress professionally and take her in early. 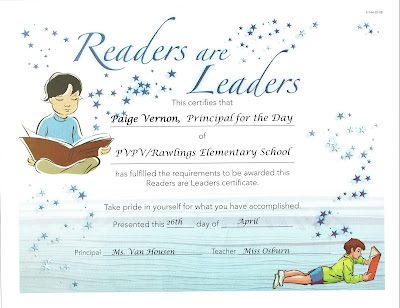 Paige had been so excited to be Principal that she'd hardly been able to sleep. She knew she'd be on the morning announcements and that she would have to speak and say her name and classroom. She practiced with me and with Mommy a few times to make sure she wouldn't forget. 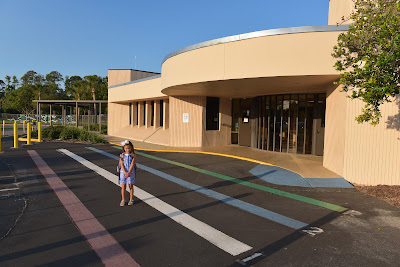 When we arrived, they pinned on her nametag and then the Principal Brubaker met with all the kids and took us on a tour of the school and offices. I snapped a quick pic of Principal Paige and Principal Brubaker together and Paige got to hold the walkie talkie. 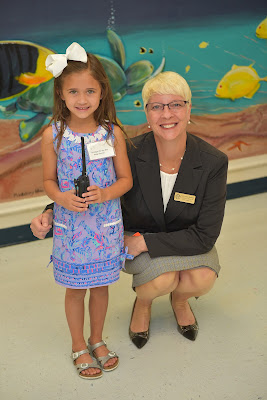 After a brief tour, we stopped off at the library to do the morning announcements. All the kids were taken in to the studio and the parents waited outside and watched the announcements on a projector. We said the pledge of allegiance, then after some announcements, all the principals were introduced. 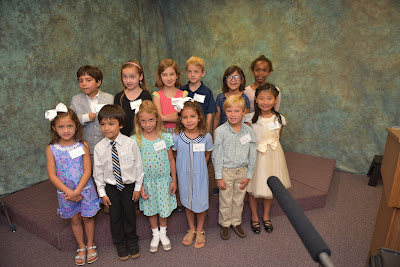 We stopped off at Principal Van Housen's desk and took some pics of the kids pretending to be hard at work as principals. 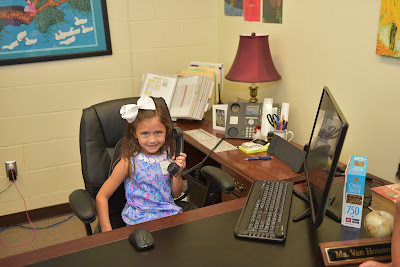 We are so impressed with Paige's drive and determination to achieve her goal. She's been working diligently on it throughout the year, and it was such a fun lesson for her to see how her hard work paid off.
Posted by Shawn Vernon at 6:31 PM

Such a smart little cookie. This little lady definitely has potential.