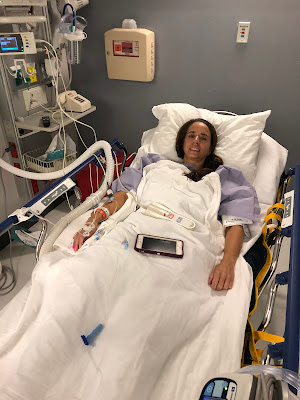 On Tuesday, June 11th 2019, we got up at 4:30am to head to Mayo for the Bilateral Mastectomy and Sentinel Node Biopsy surgery. Actually, I was already awake. I hadn't slept the entire night before, I was so nervous. Monday we'd gone to four appointments to get Andrea ready for surgery and we've both been thinking about the surgery for so long. It was super stressful when the time actually came to go to the hospital. When we arrived, we got registered and then Andrea went back to start preparations for surgery. Once she was in her gown and ready, I came back to hang out with her for the final minutes before the surgery started. Once they came in to do the nerve block, I was kicked out, and the process started.

Andrea had 10 shots in her back to block the nerves in the chest and sides of her torso. After the nerve block, they wheeled Andrea in to the operating room, and the last thing Andrea remembers is the clear mask going over her face and taking some deep breaths. I was in the waiting room and right after I kissed Andrea goodbye, I had a super upset stomach and was more anxious than ever. I watched some movies on my iPad and kept checking the tracking board to see where Andrea was in the surgery process. The surgery was supposed to start at 7:30 and at 10:30 Dr. McLaughlin came out to talk to me.

I was so nervous when we went in to the consultation room, adjacent to the waiting room. Dr. McLaughlin told me that the surgery was going very well and that her part of the surgery was complete. During the surgery, they examined the breast tissue and the lymph nodes that serviced the left breast, and found no signs of cancer. I was so relieved. I went back to the waiting room and sent texts to family and friends and teared up. It felt like a huge weight was lifted off my shoulders and with its absence I could feel how much it had been taxing my nerves. I answered some texts, then finally laid my head down on my backpack and I think I drifted off for a few minutes here and there. The plastic surgeon Dr. Terkonda came out at around 1pm to let me know that his part of the surgery was complete. Andrea had a hard time deciding between "direct to implant" or "expanders", but opted for the expanders in the end. Dr. Terkonda opted for a "wise" procedure which left a vertical scar and initially filled the expanders with 100cc fluid each. He was very pleased with the result and said that Andrea was all stitched up. After talking to him, I went out and got some lunch and then waited for them to call me so I could see her. It took another couple of hours and by 3:30 I noticed that her info was no longer on the tracking board. I talked to the receptionist and we figured out that she'd been transferred to a room. I got to the room shortly after Andrea did and I was so happy to finally see her. 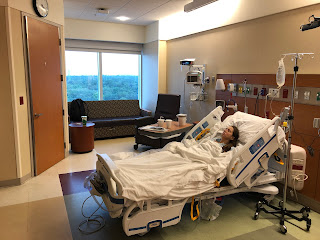 Andrea was very groggy at first and went in and out of sleep for the next couple of hours. Eventually we got her propped up and she ate some crackers and had some apple juice. Andrea decided she wanted to get up and about, so we sat her up on the edge of the bed, got her a walker, and we stood her up. We got out of the room and about ten feet down the hallway very slowly, when Andrea said she felt dizzy. We turned around and just as we got to the doorway of her room I noticed she was having trouble focusing and it looked like she was staring at something very far away. I asked her if she was ok and she said she was getting very dizzy. I could tell she was losing consciousness and just as we got her in to a sitting position on the edge of the bed she went a bit limp a couple of times. We called in all of the nursing team and got to work on her. They elevated her feet, checked her blood pressure (which was low), and we noticed that Andrea was clammy and pale. Eventually Andrea's color came back and the head nurse advised us to have Andrea sit in the chair for an hour or so before trying to walk again. 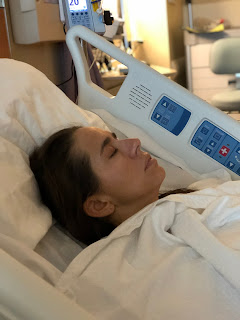 We took it easy for the rest of the evening. I got us both a smoothie from Tropical Smoothie cafe, and we eventually got Andrea in to the chair. We went very slowly, had a wheelchair close, and made our way down the hallway and back. Andrea did awesome with her walk and she felt much better that she was able to get up and out of the bed to get her blood moving. 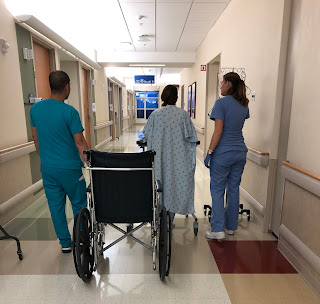 After her walk, we started getting the room ready for the night. I folded out the couch and made it as comfortable as possible with one of our Costco blankets from home. I was so tired. I think by the time I laid down I'd been awake for around 40 hours, so it didn't matter that the bed wasn't too comfy. 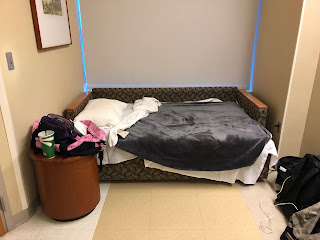 My eyes were pretty bloodshot, I think I looked worse than Andrea. I snapped a selfie of my super red left eye before bed. 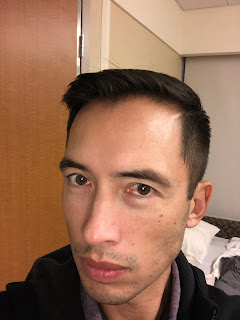 During the night, Andrea's nurses came in and brought her meds every four hours and eventually removed her catheter and changed her drains at 4am. In the morning, Andrea ordered some food and we got her up for a few short walks around the room. She was feeling a bit of pain, but she looked great and we both felt much better after getting some sleep. 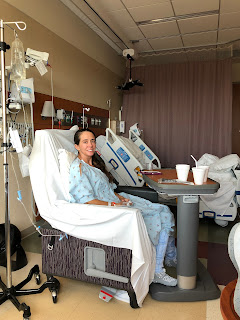 By 11:30 we'd gone through the discharge instructions and I pulled the car around and got Andrea loaded up. We stopped by Chipotle on the way home and got some burrito bowls and guacamole and we got Andrea comfortable in her new recliner. After lunch, Andrea walked around a bit, we read a letter from Paige, watched a little TV, then Andrea took a nap. It was so nice to be home and I felt much better after a shave and shower. Andrea still can't shower until tomorrow, but she washed her face and I made a couple attempts at brushing her hair. Thankfully Andrea's friend Michele stopped by with a pillow and some food she'd made for us, and she was able to brush out Andrea's hair.

It's evening now and we're just chilling on the couch watching the Blues try to win the Stanley Cup. Andrea is doing much better than I'd expected at this point and she looks great. She's talked to a few people on the phone and got caught up on text messages. The medicine is definitely making Andrea super sleepy and she is waiting for 11:00 so she can take her last meds of the day and go to bed. So far, so good, we have all been praying for Andrea and wishing her well, and we are so happy to get some good news about the cancer. We should receive the final pathology from the surgery in 2-3 days (hopefully by Friday) and we should know for sure if the lymph nodes were clear of any cancer cells.  It is likely she will still have to undergo chemotherapy, but for now we are just focusing on her recovery from the surgery and we are counting our blessings.

Andrea is such a strong gal. We are so glad the results were good and she came through the surgery with flying colors. I imagine it was a bit of a scare when she was dizzy - glad that was nothing more than low blood pressure.