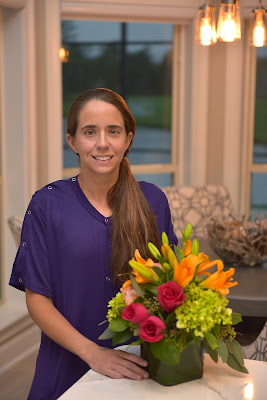 Andrea has been recovering very well so far following her surgery, I am so happy to see her up and about, without much pain, doing awesome! Andrea was discharged with 4 drains (2 on each side) and prior to surgery we purchased a post-mastectomy top that had built in drain holder pockets on the inside. (Amazon Link to Top) The shirt is cute, purple, and makes caring for the drains much easier. We actually ordered another in a different color so Andrea has a couple colors to choose from.

A couple times each day we will pull a tool along the drain lines to produce suction to remove fluid from around the surgery site and in to the bulbs at the end of the lines. Once each drain is producing under 30mL of fluid in two consecutive 24 hour periods, the surgeons will remove them. One of them is already ready to be removed, but the other three are still collecting quite a bit of fluids.

The great news is that we received the final pathology results from Andrea's surgery. In her right breast, there was no cancer cells or abnormal cells found. In the left breast, all of the invasive cancer cells appeared to be gone and there were only a few DCIS areas remaining that hadn't shown up on the mammogram. The lymph nodes that were removed showed no signs of cancer cells, which is a huge relief. We meet with the oncology team soon, and we will know more about Andrea's treatment options once we go to that appointment.

We are both very relieved and hopeful that the cancer was isolated and removed.

Our friends and family have been supportive and Andrea's received multiple bouquets of flowers and food since we got home. It has brightened up the house and we are thankful for the wonderful people that care about Andrea so much.
Posted by Shawn Vernon at 5:28 PM

What a joy to have such good reports after all that worry. What a weight that was lifted from both of you. Great news.