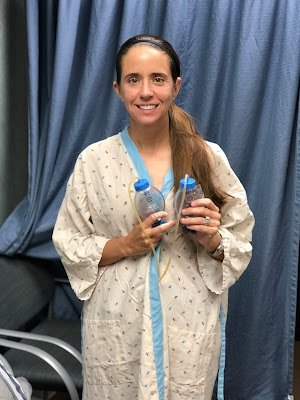 Following surgery, Andrea had four drains at her surgery site and we've been emptying the drains and measuring the fluids a couple of times per day. Andrea had two drains (#1 and #2) on the left side and two drains (#3 and #4) on the right side. The drains needed to stay in place until each one had less than 30mL in two consecutive 24 hour periods. It was quite the process of running a little tool down the length of the line to the collection bulb and emptying the drain in to a measuring vial. The drains were definitely uncomfortable for Andrea as well and we were always worried they'd snag on something or get yanked by accident. They also prevented her from really sleeping comfortably.

We kept a lot in a book and I put it in a spreadsheet so we could more easily sum the values for different ranges. Tube #3 never really had much fluid in it and by Monday Tube #2 was also below the threshold and was ready to come out. We went to an appointment on Monday to have 2 of the drains removed and it was pretty uncomfortable for Andrea when they pulled the long snaking drain out. You could actually see it moving beneath her skin as the nurse practitioner pulled it out.

By Tuesday, the last two drains were not producing a lot of fluids and we went from emptying them twice per day down to once per day. By Wednesday, they could definitely have been removed, but we waited until today (Thursday 6/20/2019) to remove the last two. We snapped a pic of Andrea at the appointment holding the last two drains just before they were removed. 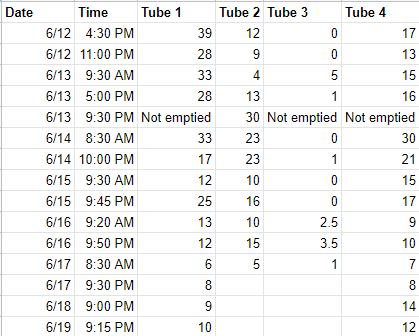