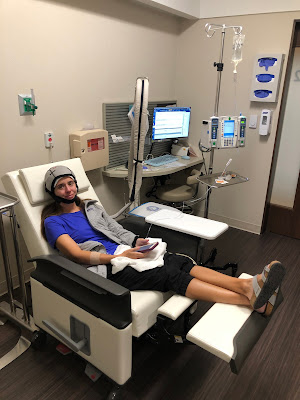 On Tuesday, July 30th 2019, Andrea had her first chemotherapy treatment of Taxotere and Cytoxan. We arrived in the morning at 9am to meet with Dr. Advani and reviewed the treatment plan. Unfortunately our insurance hadn't approved the Neulasta shot to boost the white blood cell count following treatment. Dr. Advani didn't feel comfortable putting in the official order for the chemo drugs without the authorization for the Neulasta shot. The insurance company had been working on the authorization for a while and we were pretty disappointed it wasn't approved on schedule for the treatment. They'd told us they would review within 15 days and as of Tuesday it had been 18. The hospital called the insurance company and so did we. We sat on the phone with them for quite some time and they eventually told us they were working on it and would call us back. We refused to get off the line until the issue was resolved and after over an hour we finally got their approval.

At one point one of the nurses told us it probably wasn't going to happen that day due to other appointments that may conflict, but thankfully after the approval was confirmed we were able to start  an hour and half later than scheduled. When we got in the room we fitted the Paxman on Andrea and the machine started while Andrea got her pre-chemo meds. The Paxman keeps her scalp cool to restrict blood flow and possibly help with hair loss. When the chemo started, we put on the frozen mittens and slippers, switched on the heated seat, and put some heated blankets on Andrea. It was not comfortable for her and her feet probably hurt the worst. The mittens and slippers are supposed to help with nerve damage which can cause permanent neuropathy in the hands and feet. 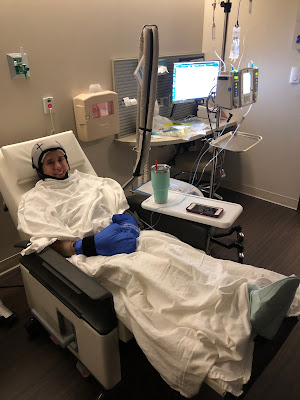 We switched on the TV, watched some Animal Planet and Shark Week programming, and just tried to relax. Once the Taxotere was done Andrea took a bathroom break and then we got some fresh blankets, fresh frozen mittens and slippers, and started with the Cytoxan. When the Cytoxan was finished Andrea was able to take off the slippers and gloves and was finally able to be on her phone. The Paxman had to stay put for another 90 minutes to keep her head cool, and once that finished we packed up and left. Total time for treatment from pre-drugs (30 minutes) to drugs (2 hours) to cooldown (90 minutes) was 4 hours. 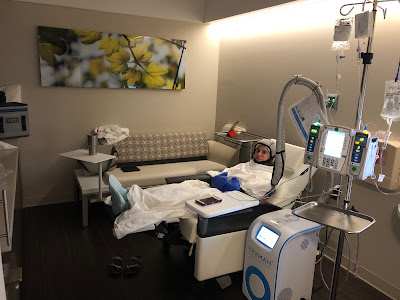 Overall, the rooms were very nice at Mayo. It was great that they were private, quiet, and comfortable. We learned quite a bit about how everything works and how to stay comfortable during the treatment. The cooler with the cold stuff worked well and the gloves and slippers stayed super cold until they were needed. We forgot to have Andrea chew on ice chips during the treatment, which could have helped with mouth sores and taste buds. Hopefully not too much damage done with the first treatment, we'll have to remember that for next time.

Andrea's been home for a couple of days and is doing great. Other than not being able to wash her hair, she is happy and feels normal. Hopefully she continues to do well during her treatment.
Posted by Shawn Vernon at 4:02 PM