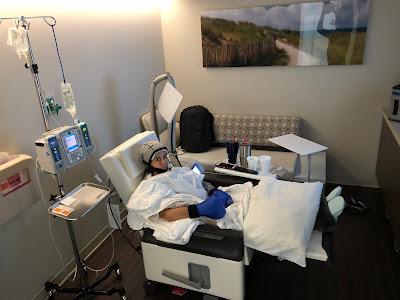 On Tuesday, August 20th, Andrea and I went to Mayo for her second round of chemotherapy. It took an extra hour since they didn't have the Paxman unit running beforehand. Andrea's head hurt quite a bit when they first started running the Paxman, until it got numb. After round 1 of chemo, Andrea had some neuropathy in her hands and feet, so we tried hard to be sure her hands and feet stayed chilled as much as possible.

Andrea's been feeling pretty good after round 2, but she is a little upset about the first major shed of hair about 19 days after the first round of chemo. We'd been hopeful that the Paxman would prevent much hair loss, but we'd estimate that she's lost possibly 40-50% of her hair at this point. Much of the hair loss is on the top and back in the center of her head. It isn't very noticeable yet, but it's difficult as it sheds since the hair that's falling out gets tangled in to the remaining hair. Her Paxman kit came with a brush, but it's very difficult to work the tangles out and we've found it's easier to just be gentle and patient and use our fingers to untangle a little at a time. It's also hard since Andrea's not supposed to wash her hair often and she's only been washing it a couple times per week.

Andrea's been experimenting with a couple of hats and head wraps and isn't comfortable leaving the house any longer without something to cover her head. We're hoping the hair loss won't progress much further.
Posted by Shawn Vernon at 7:44 PM