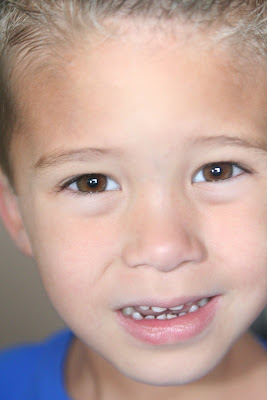 Connor's gotten a few ear infections lately. He's had tubes in both ears for a while, but unfortunately the right tube has worked its way out partway and it's not allowing the right ear to drain. This past week, he was crying about it hurting and we had to put him on antibiotics. While he was on the antibiotics, somehow the left ear got infected. Thankfully the left ear's tube is still in place and although it was yucky and drained fluids, it didn't bother him.

Most of the fluid's stopped coming out, but you can still see some residue inside his ear canal. It's not real easy to clean it up, but it's getting better. 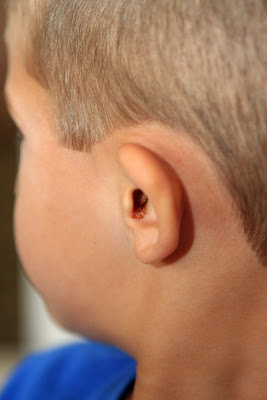 We took him to the ENT and the doctor said that we should just wait and see if he'll do OK without a functioning tube in his right ear. Hopefully he's outgrown most of the need for a tube, but based on this most recent infection it's obviously possible and definitely bothers him when infected.
Posted by Shawn Vernon at 2:36 PM