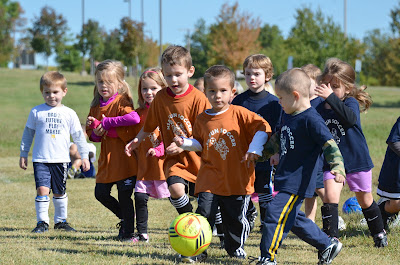 This morning, Connor had his first outdoor soccer session with his SPCAA team. It is an outdoor league that plays on a field near Maplewood college. The setup is different than the last outdoor league we tried and it's much better. There is a coach for each team and they spend the first 30 minutes practicing and the second 30 minutes scrimmaging.

Connor's coach interacted well with the kids and had some good drills that challenged them, but were not too advanced for them. There are only six kids on the teams, so the coach is able to focus on all the kids and he did a good job explaining everything to them and keeping them going. The kids on Connor's team are all great too. They all listened well, cooperated with each other and were good teammates.

Connor scored a goal in this drill while the little girl tried to defend. 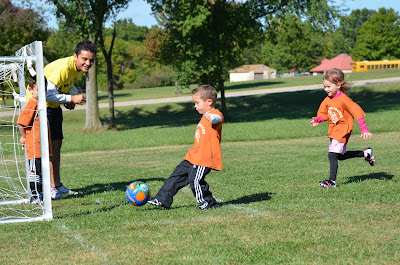 After he scored, he had to defend and he did a good job trying to be aggressive and get the ball, but he got unlucky when the little girl kicked it between his legs and it went in to the goal.


Daddy took a quick picture with Paige before the game started. 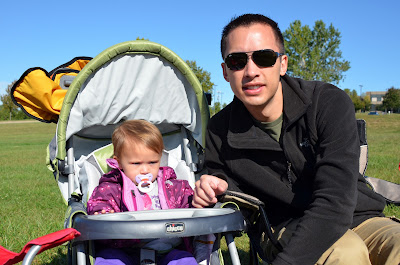 After the drills, the real fun started! It was game time! 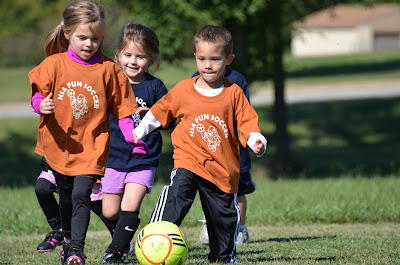 Connor ran well, stayed aggressive, and knew what to do when he got the ball. All that running made him super thirsty. Little sister snuck a drink from Mommy's bottle while Mommy was distracted. 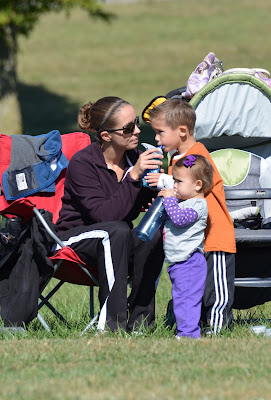 Connor scored THREE goals during the game! Nobody was officially keeping score, but Connor's team scored somewhere between six and eight goals. The other team scored a couple. Connor did a good job on offense and defense. At one point he got the ball by his team's goal and Mommy commented later that it was a big moment because a lot of kids would have just kicked the ball in to the open goal. Connor stopped, turned the ball and went back in the other direction.

Here is Connor, a split second before he kicks the ball in to the goal. 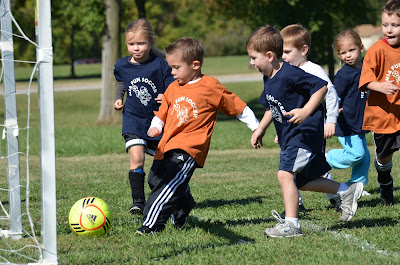 Connor had so much fun and did such a great job at soccer. We are so proud of him. One of the other moms commented to Andrea that Connor is so athletic. Typically, during the game a couple kids would sit out while the others played, but Connor ended up staying in and playing almost the entire game. After one of his goals he got a drink and asked: "Mommy, was that a good play?" 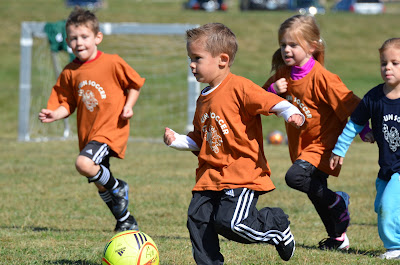 After the game when we got in the car, Connor said: "My booty gets sweaty when I play soccer." Yes indeed Buster, truer words have never been spoken.