We're debt free! Including the house! 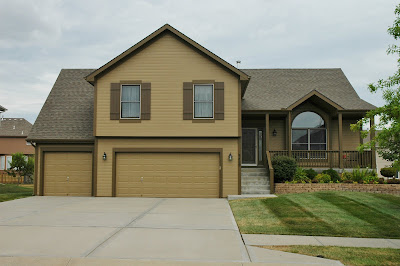 This month is a big milestone for us and our Dave Ramsey plan journey. We came across Dave Ramsey's radio show when he replaced Dr. Laura on a local AM station. We started listening and following his "Total Money Makeover", watched his TV show and went to see him live when he was in Kansas City. We really committed to the plan in January 2007 and have changed our lifestyle and paid off a bunch of debt.

By August of 2008 we'd finally paid off credit cards, 2 cars, and student loans for both of us. We were debt free except the house and Andrea called in to the Dave Ramsey show and we screamed "We're debt free!" on the air. Although we still had the house to pay off, that is typically the moment that Dave Ramsey encourages everyone to really celebrate.

Since then, we knew the next step was the house and for about a year we continued to pay for everything with cash, but didn't really try to tackle the house since it was so overwhelming. After we "upgraded" both our cars and bought some toys we decided that it was time to start paying on the house. This month we finally have the whole thing paid off! We're probably going to move soon, but it's neat to know that we achieved this milestone.

Our next house is going to probably be a bit bigger, so we'll end up with a mortgage again in the future. At least we'll have a nice down payment on it, hopefully we can pay it off eventually as well. We're proud of our hard work and commitment and wanted to be sure we remembered this moment!

Congrats!!! What an accomplishment!!! Although, I do have to tell you that Dave might freak at your post for including him in it if you are taking out another loan...when we went to see him Steve (free-spirit) begged Dave to agree with him on his idea of buying a lake house and taking out a small mortgage and I truly thought his eyes were going to pop out of his head. He made us vow to never borrow money again. But don't worry...I won't show him the post :-) Yes, I like to talk as though we are best friends! Enjoy Florida...super jealous!