Andrea's running partner Mandy posted this on her blog. We thought it was very sweet and wanted to post it here as well. 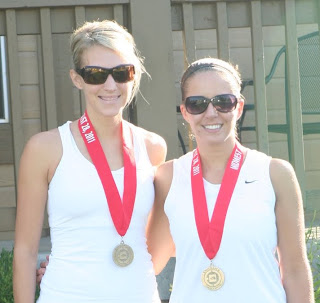 She's the best. Andrea and I have been running together since 2008. Not only is she my running partner but lately she's also been my workout buddy too. We met a couple of years prior when I was pregnant with Jax. We met because she hired me as her personal trainer. Not long after that she became pregnant. She had Connor one month after I had Jax. We've been running together ever since. Now we both have two kids and don't let it stop us from exercising regularly. I look forward to our hour long runs together twice a week. I view it as "girl time" because we jabber the hour away while we run our 4-6 miles. It works out well.

This morning we got up to participate in the North Face 10K. We set a new PR but I know I wouldn't have finished with that time if Andrea wasn't there. Even in our weekly runs we do this; we pull energy from each other. When I don't have any energy to keep running she does and pushes me along and vice versa. This same thing happened this morning at the race. She had tons of energy during the race and I reserved a lot at the end. She kept me going throughout and I pushed her to finish strong in the end. We finished 33rd out of 500 and our official time was 53:02. That's an average of 8.33 minute mile. Our goal was to finish under 55 minutes.

I can't believe we've been running together for 3 years and this is our first race together. I'd do races and she would do races but it never seemed to match up that we would do one together. And sadly after 3 years of running together I'm preparing to say goodbye to it all. Her family is moving to a warmer state. We aren't sure of the date (it will depend on when their house sells) but when it happens I know I won't be able to replace her. We've always been the same pace, been able to do the same distance and have been able to easily fit it into our lives around children, work and husbands (they have all stayed happy as we've weaved it into our schedules). The other thing we have in common is we don't like to run early in the mornings unless we have to. Getting up at 5 or 6am isn't anything we ever do. I love that part because many runners like to get up early...we just don't!