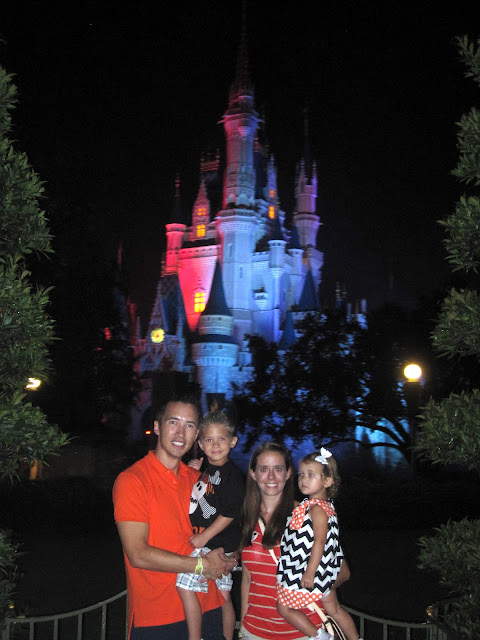 This Friday I took off work a little early and we drove to Orlando for Mickey's Not-So-Scary Halloween Party. The party goes from 7pm to Midnight and it's actually a separate admission ticket. Since, we have season passes, they allowed us in early, so we got there around 4:00. There are a limited number of tickets available for the party and since it's still in September we were hoping it'd be a quiet night. It was!

The weather was a little warm at first, and it did rain for a couple hours, but it was a great time. We rode absolutely everything and the longest wait was about 5-10 minutes. Most rides, you'd just walk in and get on. It was really neat to see the park at night and without the crowds.

Mommy and Paige posed for a cute picture on the "Small World" ride. 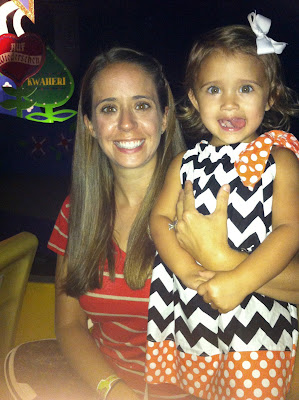 Paige took a fruit snack break while Daddy waited for Mommy and Connor at Thunder Mountain. 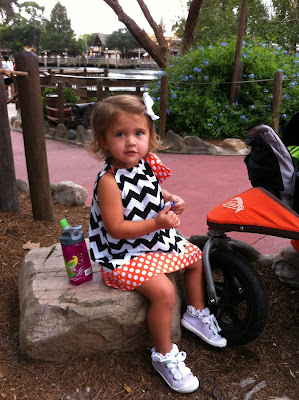 We all rode the river cruise together. 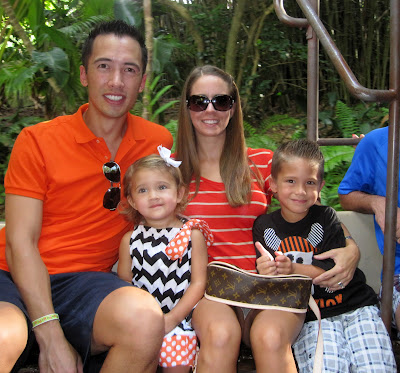 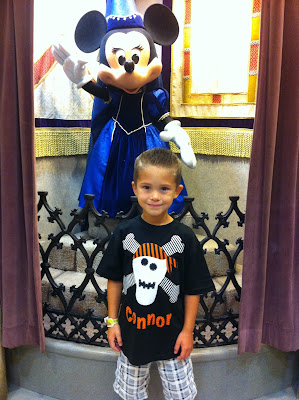 The castle was beautiful all lit up at night. 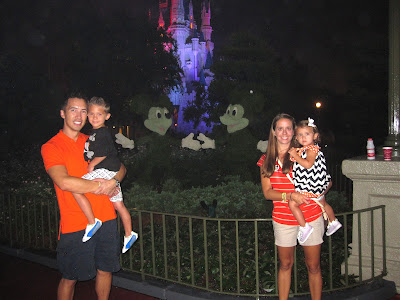 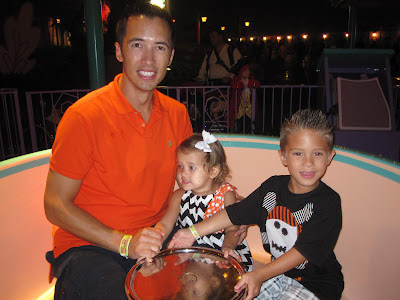 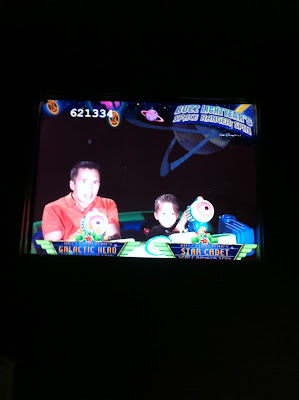 There were a bunch of spots throughout the park for trick-or-treating. We got lots of candy! Some people were dressed up, but we just wore some Halloween outfits. 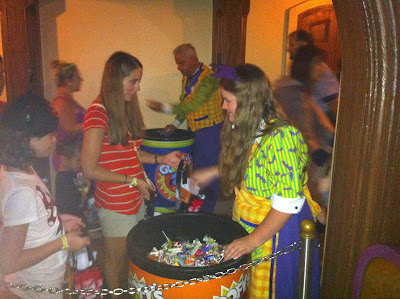 We left before the park closed, but pretty darn late. The kids were pooped! 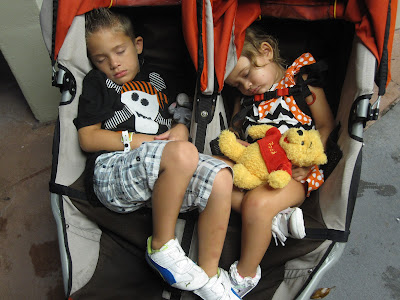 On Saturday, we went to the Animal Kingdom. In the past, this park kind of stunk since Connor was too short to ride any of the good rides. This time, he was able to ride a lot more. He really really loved the river raft ride, which got everyone soaked. He rode it first with Daddy. 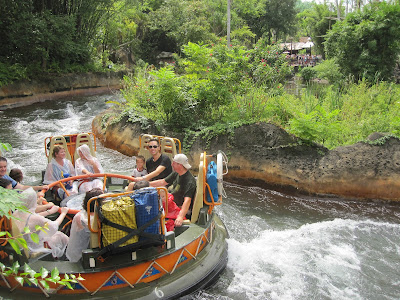 Then, he rode with Mommy too. 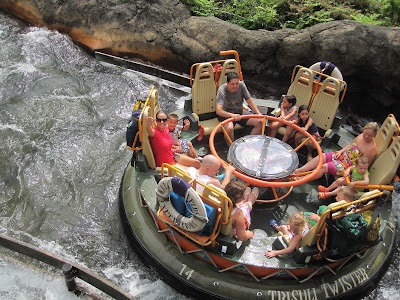 After two times through, he was soaking wet! 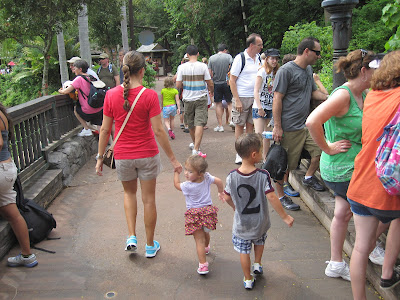 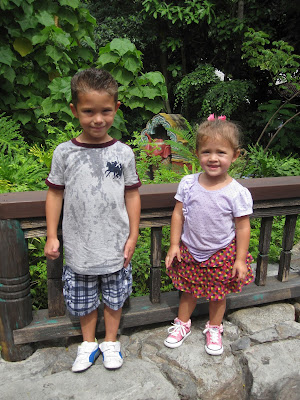 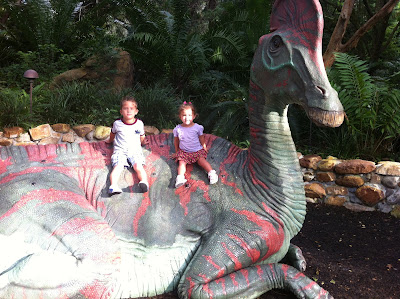 On Sunday, we left pretty early, but we stopped by Downtown Disney to do some shopping. Connor wanted to take his picture with some of the statues and decorations. 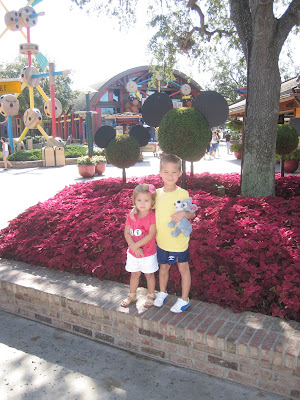 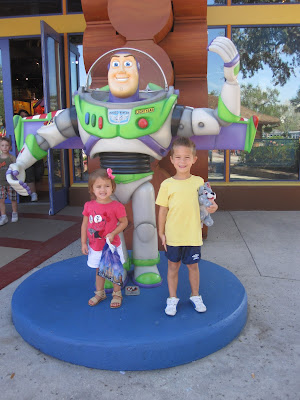 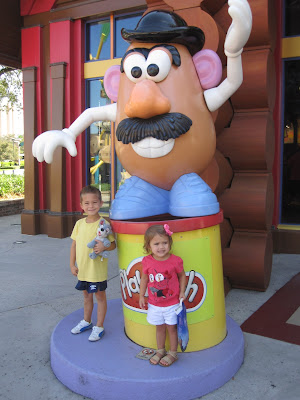 Our visit was also a nice opportunity to eat at one of our favorite restaurants. Unos! It closed in Daytona Beach recently, so we ate at Unos every day. 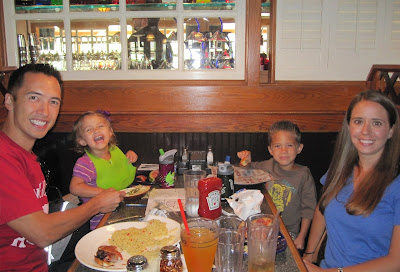 We didn't want to subject the kids to the same kids menu every day, so got Connor some Mexi-melts from Taco Bell and watermelon. 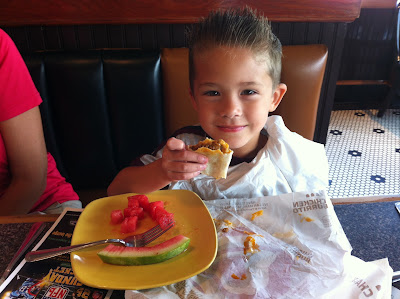 Paige loved the rice at Unos and we also got her some watermelon too. We had a great mini-vacation! It was neat to do this again as Florida residents. The trip didn't cost too much, and it was just as fun as when we'd visit from Kansas City. It's neat we can do this kind of trip over a weekend.

Connor was an absolute angel on the trip. He was a great listener, had lots of fun, smiled nicely for the pictures, and was perfect. Paige had fun, but was a big challenge. We struggle with her at times and she can be pretty difficult. She would want to walk by herself, but then she'd run in to people, or would run away from us. If we carried her, she'd get mad. If we put her in the stroller, she'd get mad. She was mad a lot. It is hard to be the parent with the shrieking and out of control kid. It wasn't constant, for the most part she was OK, but when she melted down it was no fun for anyone.

I took a brief video during one of the meltdowns so we could remember that our family trips aren't always pleasant.

Looks like you all had a great time except for the last video. Not all fun and games, but still loads of fun, and great memories for the kids.