Paige burns up all her doll clothes with her lamp 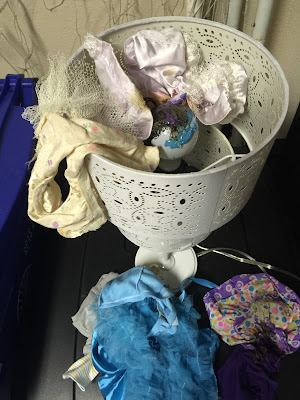 On Thursday morning we had a scary incident. The kids are home for Spring Break and early in the morning, the kids went upstairs to play after breakfast.

Paige came in to my office a little while later with tears running down her face. She was trying to talk, but was so worked up that nothing intelligible was coming out. I picked her up and put her in my lap and was surprised to find that she had an odd smell to her. I tried a few times to get a story out of her and finally she just got up, grabbed my hand, and told me to come see.

I went upstairs to her room and saw the lamp. It was pretty obvious what the problem was, and after reviewing the camera footage from her room and talking it through with her, we figured out what happened.

The night before, Andrea noticed Paige had put one of her babydoll clothes on her lamp and it had gotten pretty warm. Paige was asleep, so Andrea just switched off the light and hid the baby clothes and planned to talk to Paige about it in the morning. The next morning, Paige found all of her baby doll clothes including an outfit she'd gotten while we were on vacation in South Carolina. She decided to pretend she was a mommy and "wash" the clothes in the washing machine. She turned on the lamp by her bed and pretended it was a washing machine. She piled all the clothes on top of the lightbulb, and a few moments later started moving them around to wash them. Her finger apparently touched the bulb and it burned her skin a little bit and she went to her bathroom to run some cold water over it. When she came back she saw the clothes smoldering and smoking and thankfully turned off her lamp. She came down to get me shortly after.

The entire upstairs smelled horrible. The smoke hadn't been bad enough to set off any alarms, but it was pretty gross smelling. I opened up windows, took the lamp out to the garage, and then had a long talk with Paige. I told her I was most worried about her, and was glad she didn't get hurt. We've thoroughly discussed the dangers involved, and while I'm disappointed it happened, I feel extremely lucky that it didn't turn in to something much worse.
Posted by Shawn Vernon at 4:30 PM