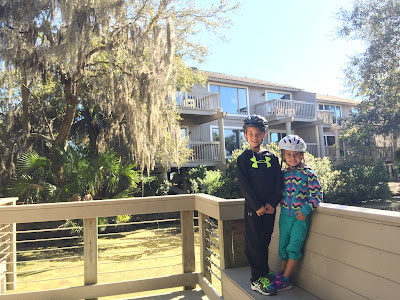 For Spring Break this year, we decided to go North to South Carolina and try the Wild Dunes resort. We drove up on Saturday, after getting the house all ready for showings.

We stopped off at Amelia Island and Connor participated in his third tennis tournament. He actually did very well, but his very first matchup was against a little girl that was playing very consistently. She just kept hitting everything back in against Connor and would eventually win many points that way. Connor was winning 2-1 at one point, but got frustrated and started playing with more power. It worked for a little while, but he became a little more inconsistent and ended up losing the match 2-3. Connor won his other 2 matchups handily and after he received his medal for participation, we set back off on the road.

I downloaded new episodes of "Austin and Ally" for Connor and the TV movie "The Descendents" for Paige. Both kids were good in the car, and Paige actually watched more "Austin and Ally" than anything else. We arrived pretty darn late and Google Maps took us through some spooky backwoods roads in the dark. We checked in to our room and went to bed pretty quickly. In the morning we did some tennis, but it was sprinkling rain and a bit cool. The tennis staff didn't appear to be really in to it, and we were the only ones participating, so we decided to just do one hour and call it a day. It turned out to be a good choice since it started pouring rain not too long after we left the courts.

We decided to go to downtown Charleston since it was nearby and since I didn't have to work and there wasn't much tennis to play. We realized there was a McAlister's Deli nearby, so we stopped off there and had lunch.

The kids started playing "rock, paper, scissors" and I got a quick video of it since they were super cute about it.


After lunch, we stopped off at the historic market area and did a little shopping. Paige ended up picking out a cute handmade doll outfit and Connor picked out a Chiefs stuffed guy and some football cards. 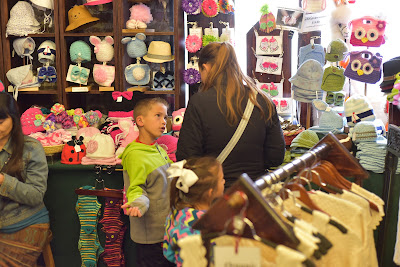 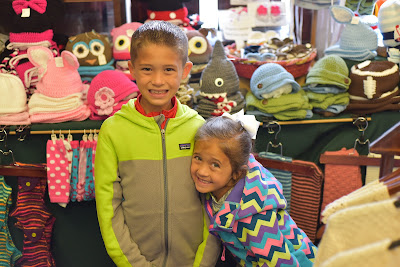 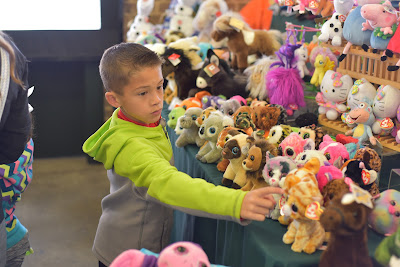 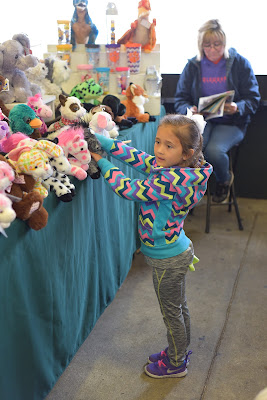 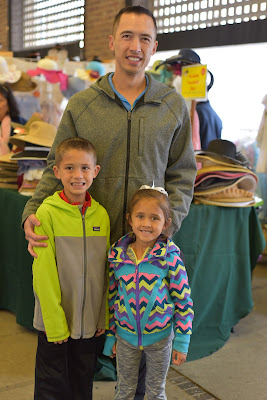 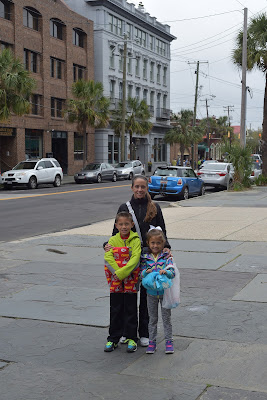 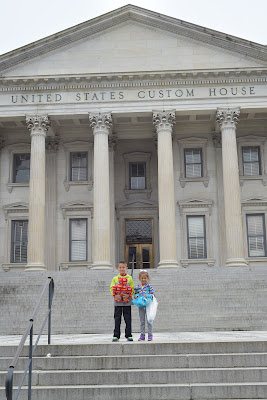 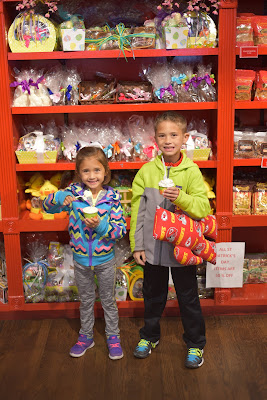 In the afternoon, we decided to rent some bikes and rode around the property for a while. We kept the bikes for the entire visit and loved taking them out and about. There were a lot of bike paths and we also explored down some of the side streets to check out the different properties available on the resort. 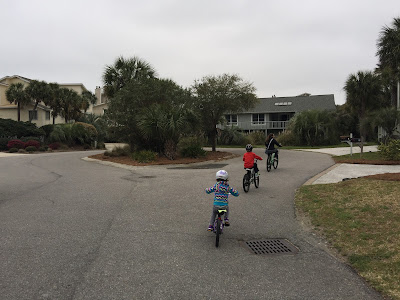 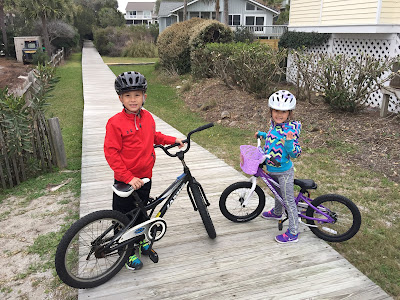 While riding around, we stopped at a little deli/market on the property and found that they served Breyer's ice cream. We ended up making it a nightly ritual to stop there on our bikes and I also loved their sandwiches. 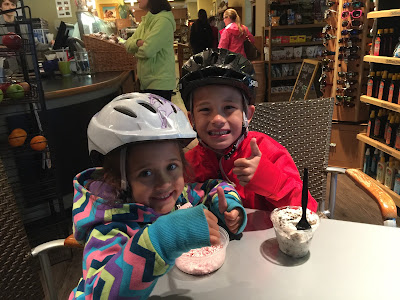 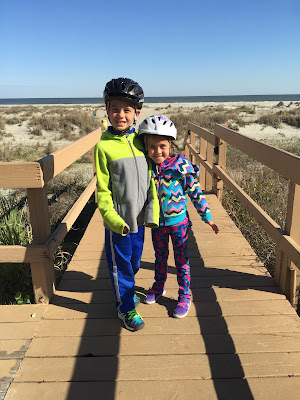 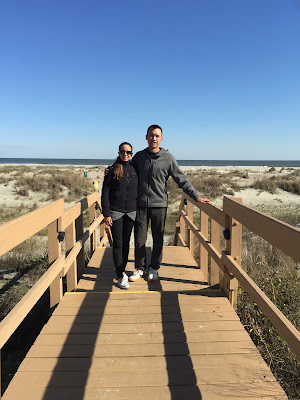 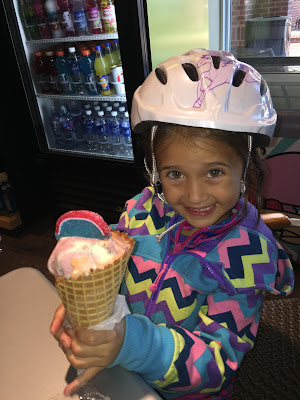 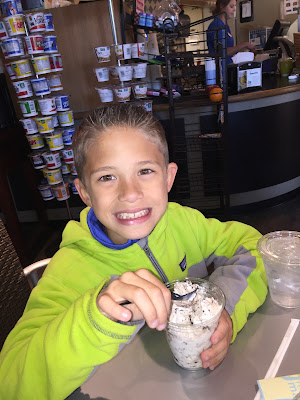 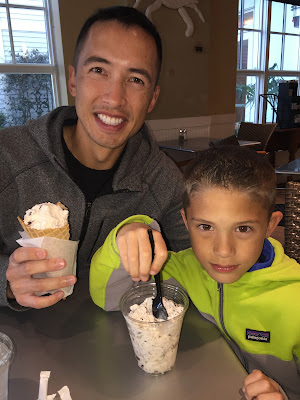 On Monday morning we did a new clinic and were much more impressed with the tennis instruction. We signed up for a 3.5 level clinic and were matched up with some very good players. The clinic was pretty difficult for Andrea and me, but we kept up pretty well and had much more fun playing with other players. The kids also did 2 hours of tennis and Paige had so much fun with a recent college graduate instructor named Megan. We could sometimes hear Paige's distinct and loud laugh from a few courts away while we were doing our clinic.

Monday night we did our usual ride and got ice cream, and then we watched a tennis exhibition. Connor participated in a footrace with some other boys, and Paige had fun helping to pass out raffle prizes. 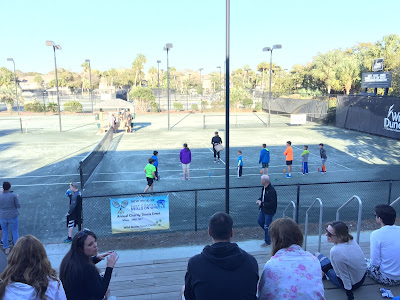 Paige cheered for Megan during the exhibition and we took a picture of the two of them afterwards. 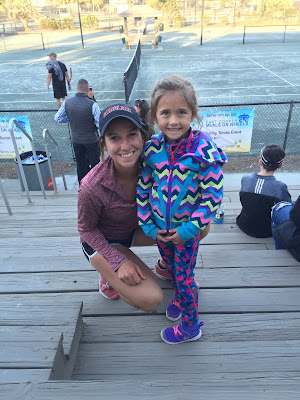 Tuesday morning, we had more fun with tennis and then enjoyed our time around the resort. I worked on Monday and Tuesday, but still had plenty of time to enjoy Spring Break with my family. We drove home on Wednesday morning. It was a lot of fun for Spring Break and I'm thankful I have such a wonderful wife that plans these trips for us! 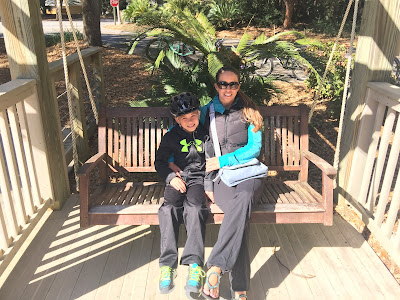 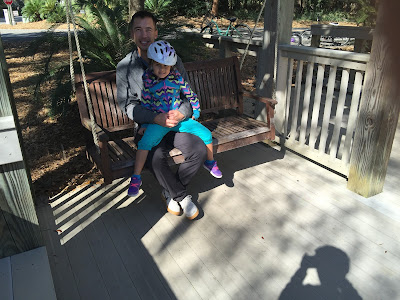