Christmas Eve games and movie... and a plumber 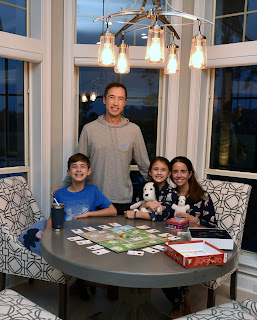 This Christmas Eve we had a fairly relaxing day around the house. Andrea picked up a bunch of sweets and lunch from Cinotti's and I picked up a couple of pies from Pie Heaven.

The kids were allowed to open one gift early before Christmas morning and we decided to give them something they could play together.

I worked most of the day and in the afternoon we watched "Home Alone" as is our family tradition in the evening. In the middle of the movie a cold front blew through and it was surprisingly violent and scary. We could see some of the enormous pine trees blowing around in the gusty wind and we were actually worried that one of the ones in our neighbor's yard might topple over and come through in to our living room where we were sitting so we went across the house to the master bedroom until it calmed down. Paige gave us a weather report out front at one point, actually it was one of the calmer moments with the storm.

Once things calmed down, we finished our movie, and then we sent the kids up to take showers and get ready for bed. Connor came down a little while later to tell us that something was wrong with his shower. When he turned it on it was a little difficult to turn the handle and he forced it over and then it stopped responding no matter what he did. I went up, thinking that maybe the handle had gotten loose from the valve, however no amount of tightening made a difference. I ended up shutting off the water completely to the house and then started pulling apart the shower plumbing. I was hoping I could find a shutoff or some way to just turn the shower off temporarily until I could get a replacement part or get a plumber, however once I removed the handle cartridge I realized that it was cracked and wasn't turning at all. The water was stuck on full blast. I tried a few things to just plug up the water valve, but due to the crack in the cartridge there were no good options. It was 10pm at this point and all the hardware stores had closed early at 5pm on Christmas Eve. I considered waiting until morning so I could just pick up a replacement part. It was just a $50 Moen cartridge and I'd figured out how to get the broken one out. If I could find a replacement it would be as simple as pushing it in place, screwing everything back together, and I'd be done. Unfortunately all the stores were planning to be closed on Christmas day as well. I finally realized that I had the option between paying for an emergency plumber service or waiting a couple days. I looked online and thankfully found a plumber that was working. It was an extra $89 dispatch fee and the repair was $300. The plumber had to go get the part, so it took quite a while, but thankfully by around 1am he was done and the water was back on and working. It was a bit more expensive than it should have been, but it was worth it and I'm thankful that he was working on Christmas Eve and I gave him an extra tip for saving the day.

A holiday moment to remember.
You can never tell when something will go wrong... even on holidays.
It's not what goes wrong, but how you handle it that a memory good or bad.