Paige and Connor both participated in a Level 8 USTA tennis tournament yesterday. The format isn't our favorite since it's a round robin tournament with matches consisting of one 5 game set and no-ad scoring. I feel like our kids do well when they have an opportunity for a reset when a match doesn't go their way and while they sometimes lose the first set they are often good at regrouping and coming back to win the second set and eventually the match. With the single 5-game set, if you get behind it can be very hard mentally. 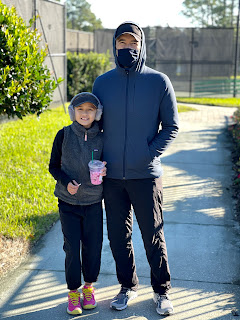 Paige and I got up at 6:45 and we ended up getting to the courts a bit earlier than her 8am start. It was a cold morning and we were pretty bundled up. I think the "Feels like" temperature was in the low 40's when Paige started her first match. Paige was in the 12U division and I think some of the girls she played were fairly developed and older than her. Unfortunately Paige was ahead in the first game of the day and it ended up slipping away on the no-ad deuce point. Her first opponent was one of the better players in the tournament and while I think Paige could definitely have beaten her, she got behind and a bit frustrated. Paige ended up losing all three of her matches for the day which was surprising because she'd actually previously beaten two of the players that she lost against. It just wasn't her day! 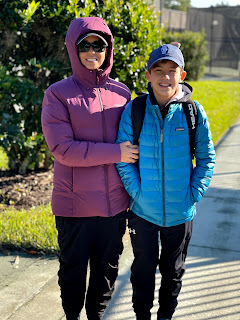 Andrea and Connor joined us later in the morning and watched Paige's final match and then we watched Connor's first match of the day. He played well and won his first three matches and was up 4-3 in his fourth match, but his opponent stepped up his game and found a way to win against Connor. Connor was disappointed that he lost and went in to his final match without any rest or time to mentally reset. He fell behind in the final match and unfortunately lost it as well.
Both kids played well and they're great competitors. We are proud of them for putting themselves out there and playing hard.