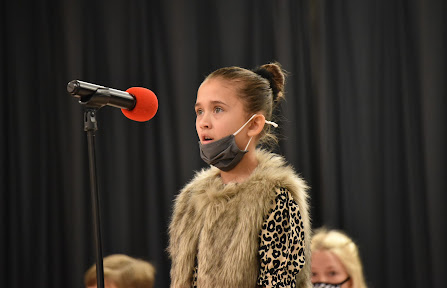 On Friday morning, Andrea and I went with Paige to her school so she could participate in the 5th grade spelling bee. Paige had a spelling bee with her classmates earlier in the week which she won, so was invited to represent her class in the final spelling bee on Friday. Out of over 220 kids in her grade level, only 10 were in the finals.

Throughout the week, we all helped Paige to study and practice all kinds of words including a three page list of words from the school. Connor helped her to study during football and I snuck in to take a video of them studying together.

Thursday Paige went in to do a rehearsal and so the vice principal could walk them through the process so they would be a little more comfortable for Friday.
On Friday morning we got up early to get ready to go in to school and after Andrea fixed Paige's hair, I took some pics of Paige in front of the tree before we left. 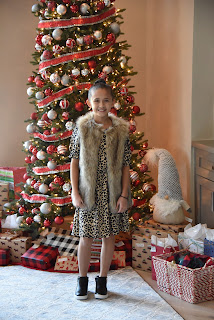 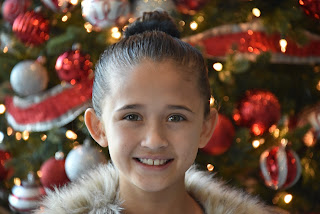 The spelling bee is typically held in the cafeteria's stage in front of all the 3rd, 4th, and 5th graders, but due to the COVID pandemic the participants were able to bring their parents and everyone else was watching via livestream. Paige was nervous to be up on stage in front of her school, and I think it was possibly even more difficult for her since she's been doing school from home all year, so it's been quite a while since we've been inside her school. Andrea got a little teary eyed when we walked through the hallways to the cafeteria. It will be Paige's last year as an elementary school student and we've had such nice experiences and memories at the school. It may have been our last time in the school. 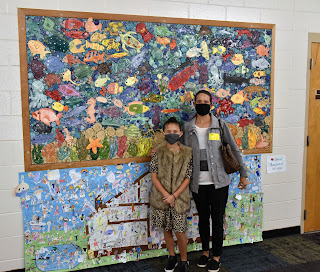 The staff setup the chairs in the cafeteria with plenty of distance between them and masks were required at all times except for when the kids were speaking in to the microphone. 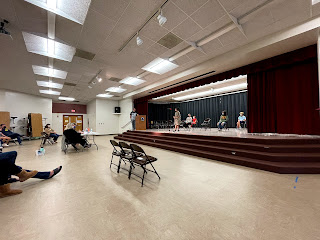 The spelling bee started off with fairly simple words, which was nice, so nobody was eliminated right away. Paige's first word was "peanut" which was quite a bit more difficult than many of the other first words. Nobody was eliminated until after nine or ten rounds, so it went quite a while before anyone made a mistake. Three kids were eliminated in the same round and then as the words got more difficult, there were multiple kids eliminated until it was down to the final three. 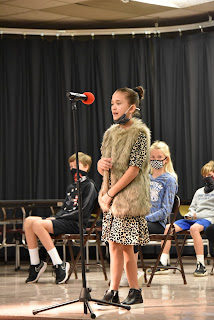 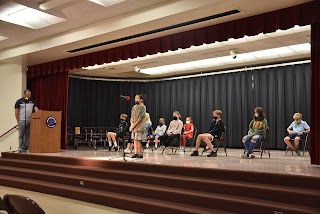 In round 16, Paige and another participant misspelled their word so the two of them tied for second place. The vice principal took a pic of the winner and of Paige with the second place co-winner. 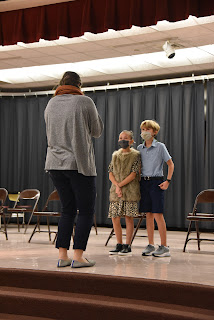 It was so fun to be at the school and I ended up being a LOT more nervous during the competition than I'd expected I would be. Paige was so worried that she would be the first one to get eliminated and she was definitely nervous to be up on stage in front of so many people. Paige is a brave, smart, and confident girl and she made us so proud. On the way home, we took her by Nektar to get one of her favorite yummy and healthy treats afterwards and she enjoyed her fruit bowl for an early lunch. 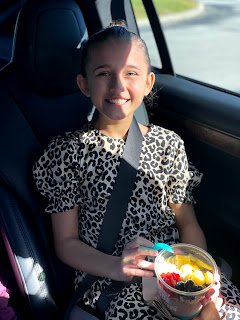 Great job Paige! You can do anything you dream of when you focus inwArdly and believe in yourself!

Below are all the words that Paige spelled (that we can remember):