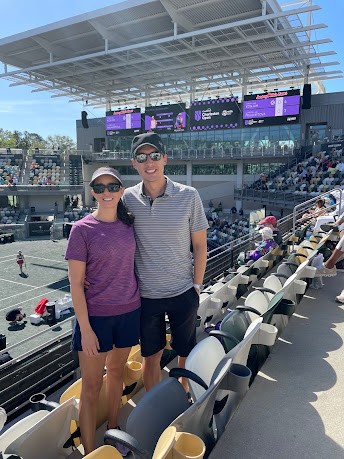 On Sunday, April 3rd, Andrea and I drove to Charleston to watch the Charleston Open together. We've watched it on TV every year, and whenever we go through Charleston we see the stadium where it's held and often would say "We need to go to that some time". Well, this was the year!

We planned it a few months ago and thankfully Grandpa Rick was willing to come to our house and be with the kids while they were in their normal school routines. Grandpa did a good job keeping the kids on schedule and Paige was impressed that he actually got up out of bed and stayed up after seeing her off early in the mornings. We did a few Facetime calls and snapped a pic of Paige with Grandpa while she was wearing her chef's hat and preparing her school lunch one evening.

Andrea and I stayed at "The Spectator" hotel, which was in downtown Charleston and about 20 minutes away from the stadium. We'd considered staying at one of the hotels near the tennis facility, but we were worried it would be pretty empty and boring out there. In fact, there were quite a few restaurants and things to do near the tennis courts, so it may be a good place to stay if we go back. The Spectator hotel was comfortable and my favorite part was all the complementary snacks and they had four choices for breakfast that they'd bring to the room each morning. We're not typically breakfast people, but we tried all the breakfast options and I loved the avocado toast with oatmeal and fruit. 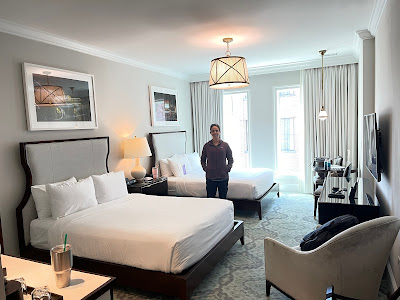 We loved our time in downtown Charleston. We went out for dinner on Sunday night and intended to go out at least one or two more times, but we were pretty tired after sitting out in the sun all day watching tennis, so we typically would be content to just clean up and then relax in the evenings. We liked being downtown, and there were lots of restaurants, stores, and the College of Charleston nearby. We took a few walks around town. 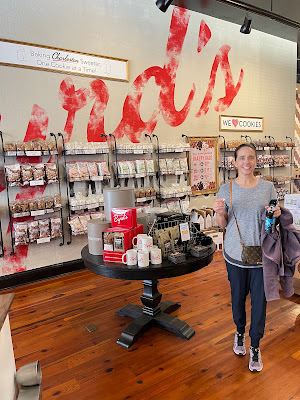 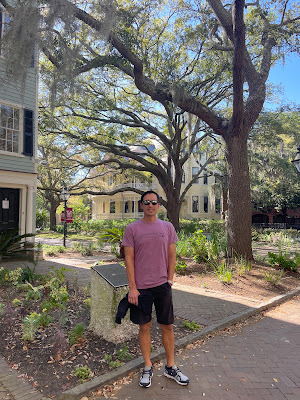 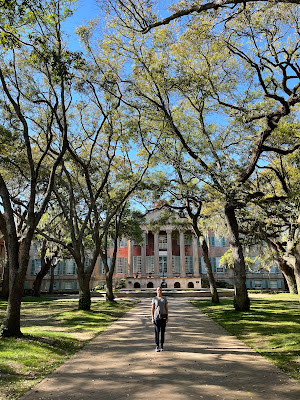 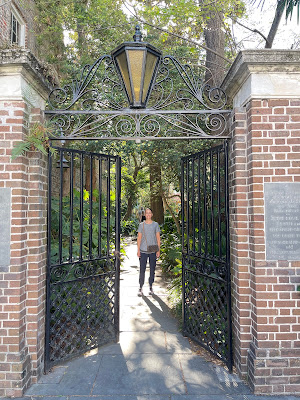 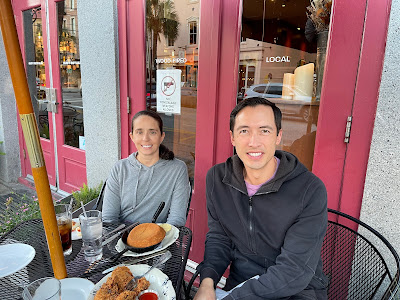 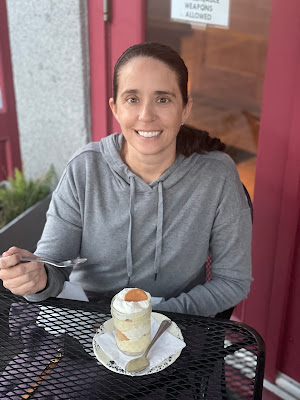 Watching tennis was the main goal of our trip and we did watch quite a bit. We had seats in sections 209 and 210, which put us in a good spot to see the action and both sides of the court. We'd hoped that the sun wouldn't be in our faces, and we succeeded in finding seats that weren't facing in to the sun, however we got a whole lot of sun exposure on our right sides and I got a little burned on my neck where I'd neglected to get enough sunscreen on the first day.
If we go back, we intend to sit in section 205 to the left of the screens. In the mornings the sun is behind those seats and they were shaded most of the afternoon.
Our seats were great, but there were some exciting matches on the side courts. We watched a few doubles matches on the side courts and some of our favorite players as well. The side courts had some seats that got you down in the action. While we sometimes were so close we got dizzy turning our heads back and forth, it was neat to see how fast everything was when you were on the same level as the players.
There were players everywhere, and unlike some previous events we've been to, there wasn't any system to keep them separated from the spectators. They'd often just be walking down the sidewalk alone or with their coaches. On the first day, we walked right by Madison Keys and unfortunately weren't brave enough to ask for a picture. Andrea made a resolution after that to be more assertive and got a picture with Pegula, Badosa, and Sabalenka.
The weather was cool, but in the sun it did get a bit uncomfortable at times. On Tuesday there was a lot of rain in the forecast, but thankfully it held off until we were already gone for the day. Wednesday it rained on us at one point, but it was a short shower and they were able to dry off the courts and resume play fairly quickly so we didn't miss much.
Day 1: 4/4/2022 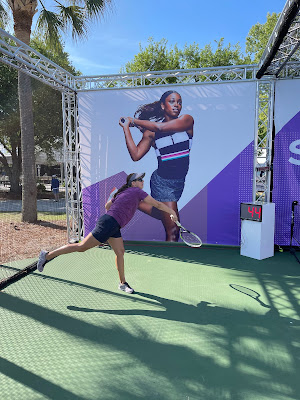 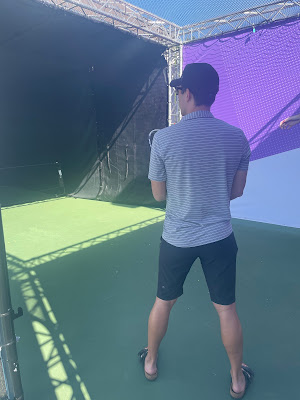 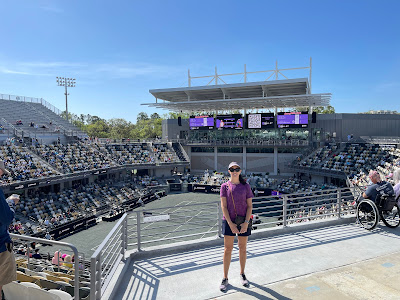 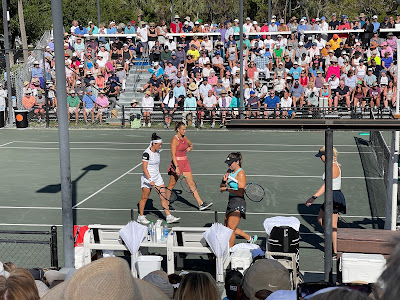 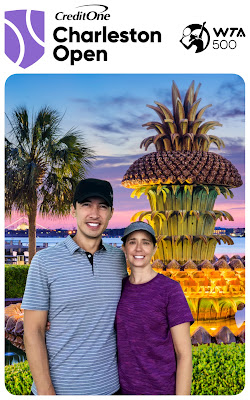 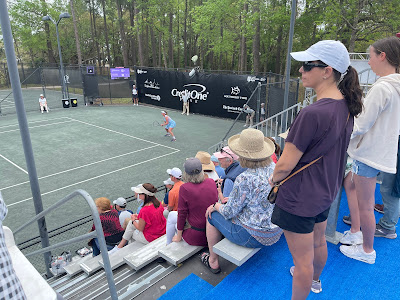 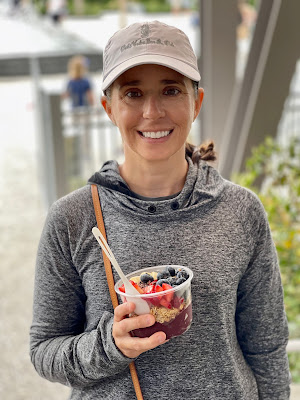 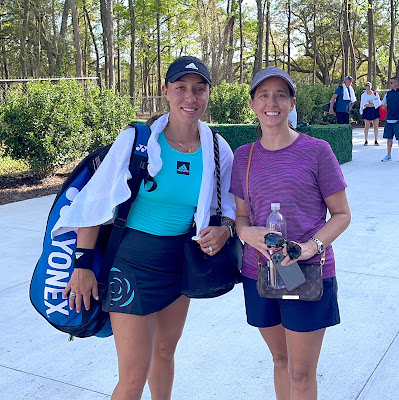 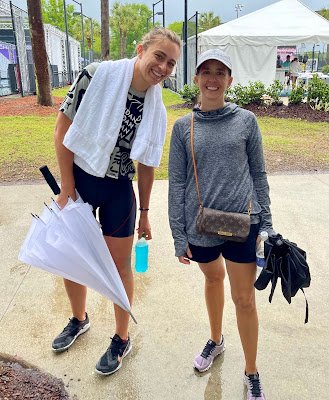 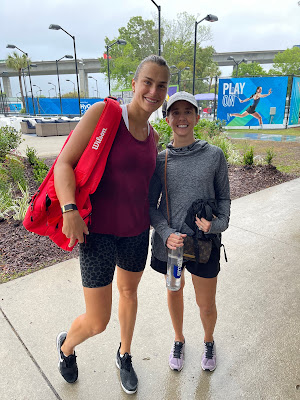 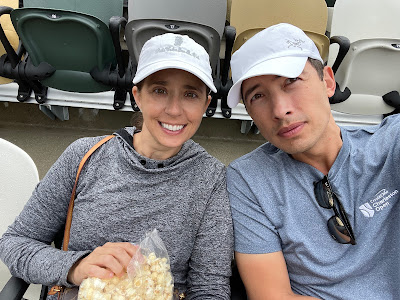 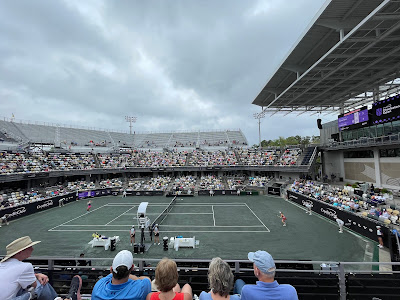 We look forwards to coming back again, hopefully soon! We'd love to bring the kids next time, if possible.