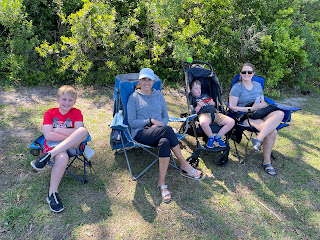 Connor played line one singles on Wednesday in their final match of the season. Amanda and her boys came out to watch him and I went along with Andrea to cheer him on. Actually, we weren't allowed to cheer at all. He was not happy about us coming to watch him but finally relented about it and said we could come as long as we didn't sit in the bleachers and didn't cheer during the match. I hope we didn't embarrass him. We have no pictures of him playing or at the match, so I'll just post a pic of his fans in the grass next to the court.