Connor vs Dad in Tennis 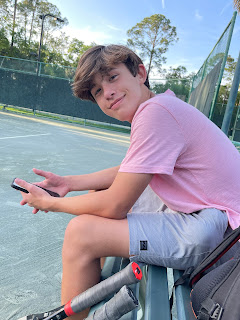 Connor had a good tennis season with high school and it's recently come to an end. They didn't have a lot of JV matches, but Connor got to play a bit and it was nice he also go to practice sometimes with the varsity players. I have not been playing as much tennis, but wanted to recently since the weather was nice and it would be a good opportunity for Connor to also get some practice. Surprisingly, I'm not much competition for him any more. A few years ago, when we first started playing against each other, I would hit in to the singles court as normal and I'd let Connor hit in to the entire doubles court to make things fair. Not long after that we had to remove the doubles court advantage to keep things close. Recently, he's just way better. A week ago when we played two sets, he beat me 6-2, 6-0. On Thursday when we played he destroyed me 6-0, 6-2. Hard to believe I could only win 4 games to his 24. We had some close games, but honestly he was pretty well in control the entire time and I struggled to compete.

It was fun playing with him although he likes to give me a hard time about it. I tell him that no matter the outcome I happy when we play. If I win, I'm happy that I'm the winner. If he wins, I'm proud of him and happy that my son is such a good player. I would like to win a match against him again some time, but he would have to have an off day and I'd really need to be playing my best to have a chance.