Daytona Beach visit with the Greats

Today, Sunday, we drove down to Daytona Beach to visit with Great Grandpa and Great Grandma. It's neat having them so close and we love taking advantage of this opportunity to visit with them. I mentioned today that this is the closest I've ever lived to them! We took them out to eat at Aunt Catfish and had a very yummy and filling meal. We love that place, although the wait was a bit long. We had hopes that we might play a bit on the beach, but according to Grandma it's the coldest day in Florida for them since they came down for the winter. It dipped below freezing last night for sure and barely topped out in the 50's. It would have been a nice warm day by Kansas City standards, but we're already getting accustomed to Florida weather so it did seem awfully cold to us.

After we ate lunch, we went back to the condo, Skype chatted with Shawn's parents in St. Louis, and played some cards. 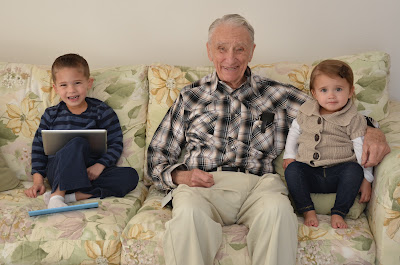 It was the first time since Paige was born that we actually got to play some adult games instead of having to constantly supervise our children. That said, Paige spilled tea on herself three times, ran around like a crazy woman, climbed on the furniture, and eventually pulled off her pants and demanded that Great Grandpa help her put them back on. Grandpa made a valiant effort at it, but it was much too tricky and they both gave up. I caught the tail end of the shenanigans on video. 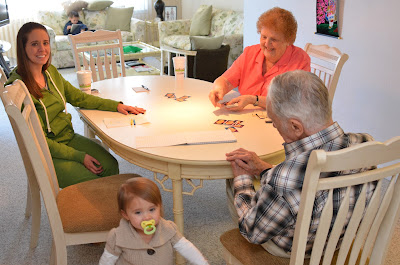 We put Paige down for a nap and she actually did sleep for over an hour. Once she woke up, we went by Cowlick's for some icecream and then bid Grandpa and Grandma farewell and drove back to Jacksonville. 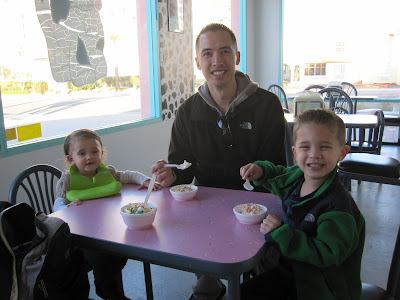 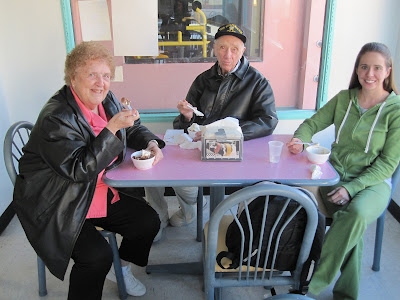 It was a great visit! We're looking forwards to next weekend and are planning to see them again!
Posted by Shawn Vernon at 8:01 PM