On Tuesday, February 14th, we got some bad news about the house. The week before had been inspections and everything was in place so the builder could pour the concrete slab foundation. The footers had been put in place along with plumbing and everything had been measured, checked and inspected. It was all ready to go on Tuesday and the concrete company arrived, prepared to pour the concrete, and then they reported a problem. Apparently the concrete used in the footers hadn't cured properly. The mix they'd used for the footers had been done improperly and it was all messed up.  Neither the builder, county inspector, concrete company, or the private inspector we hired, has ever seen this happen before. We have such great luck! Everything was ruined and now it has to be scrapped, demolished, and restarted.

They will have to remove the footers, re-grade the lot, and start over next week. We've been told they'll try to make it a priority to get back on schedule, but so far they've only pulled out the plumbing. I took the picture below, which is really heart breaking. You can see the plumbing that's been pulled out sitting next to the concrete blocks which should have been put in place on top of the slab, had the slab been poured. 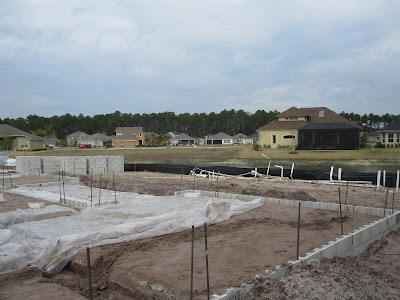 We're trying to stay optimistic that things will get going soon, but it's hard to know we're starting over!
Posted by Shawn Vernon at 8:30 PM