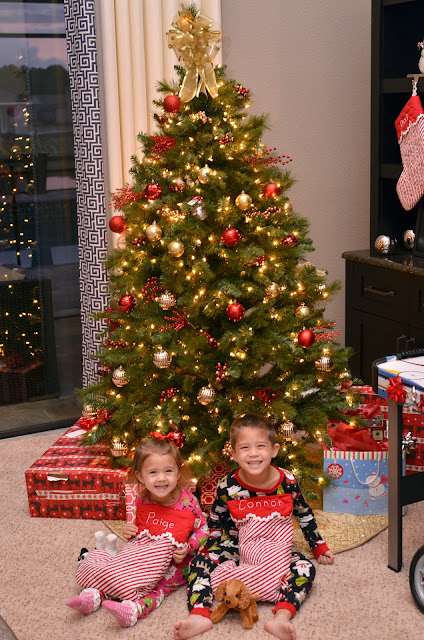 Christmas Morning, we all got up early to open gifts and celebrate. I filmed the kids as they came down the stairs and saw all the presents. Paige didn't understand that she couldn't just start tearing in to every wrapped gift she saw. It was hard to wait the extra 30 seconds required to snap a couple pictures and determine which presents went to which person. 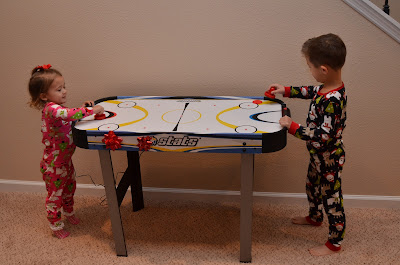 The kids loved opening all their gifts and playing with their new stuff. This year, we introduced the idea of buying other people gifts and we tried to instill the joy of giving. Paige and Daddy went shopping together for Connor and got him a remote control helicopter. I told her not to tell him before Christmas because it was a secret. She was unable to resist and told him he was getting an "airplane" days ago, but thankfully it didn't exactly spoil the surprise. Connor went shopping with Mommy and got Paige a baby doll. Both of them loved the gifts and it was fun to watch them get excited for each other. I snapped the picture below just as Paige opened the gift from Connor. 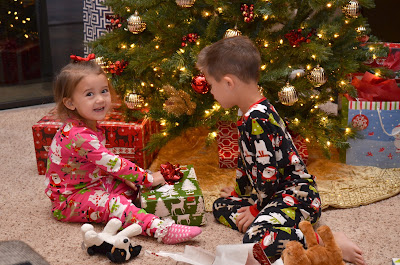 We went to Buca De Beppo for lunch, then we went home to relax. While Paige was "napping" Andrea took down most of the Christmas decorations. I helped with some of the big stuff, but Andrea was on a mission to get the house put back together and she went through the storage closet too and organized a bunch of things that had been put off since the move.

Sissy hadn't exactly been napping unfortunately. She loves the bean bag that Ga and Grandpa Garry bought her and recently she will drag it in to her "baby bed" and sleep with it. Apparently today, she found the zipper on the beanbag. It was actually a double zipper to prevent children from taking it apart, but Paige was pretty clever and somehow managed.I snapped a picture of her when I caught her in the act. What a mess!

We gave up on the nap.

In the evening, Andrea invited our neighbors over to take a dip in the hot tub. The hot tub had to work for a few hours to get warm enough, but it made it. Connor loved swimming today and even jumped in to the frigid regular pool. He had a blast playing with Ryleigh. Paige wanted to get in, but we didn't think the hot tub would be a good idea since she's been pooping a bunch lately after she eats. We knew it wouldn't be good timing so I sat out with her, which turned out to be a good idea. 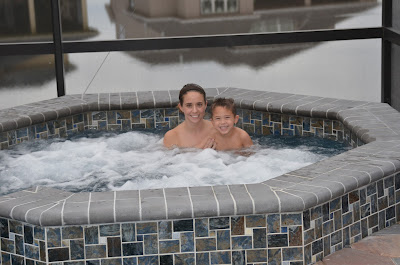 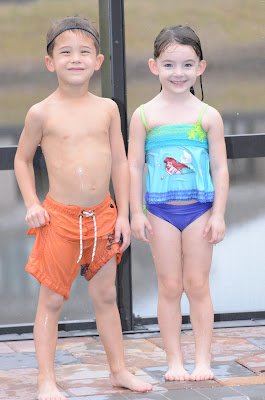 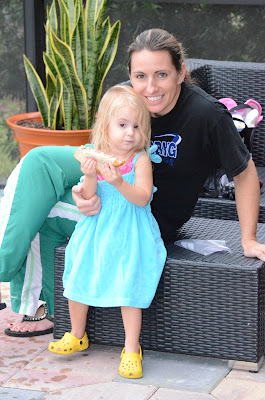 All in all, it was a quiet Christmas at our house, but a fun one. At the end of the day, I asked the children what they liked best about Christmas. Paige said that her favorite part was when Connor opened up the helicopter and it went "up, up, up". Connor's favorite part about Christmas was watching "Home Alone" on Christmas Eve. His favorite present was the helicopter. We'll have to get a video of him playing with it. Paige's favorite present was her new bike. It doesn't have pedals on it and should be a good way to teach her how to balance. 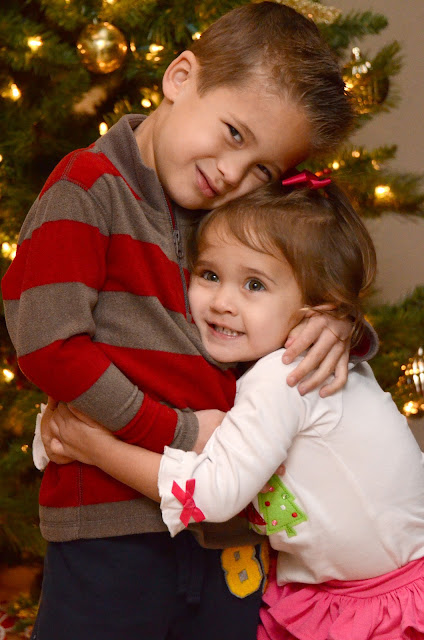