Connor had his first flag football game on Saturday. We've been practicing for a while and it was good to get the first game in the books. There is a lot more coordination and work that goes in to football vs soccer, at least at this age. The kids on Connor's team did a pretty good job and Connor had a great time. He only got to carry the ball once, but did a very good job running. He pulled a couple flags on defense and we were very proud of him. 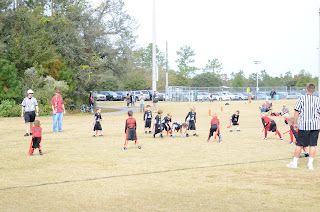 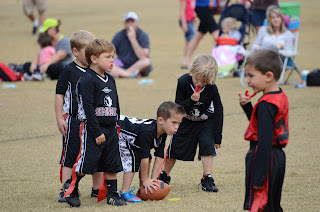 I'm the assistant coach on the team and I wasn't very involved in the first game. Clay (the head coach) asked me before the season started if I'd be willing to be the assistant coach for the team and I agreed to give it a shot. The league was short on coaches for this age range and I'm pretty sure I know why. It's very difficult to teach the rowdy young boys the game and there's a lot of pressure from the parents to spread the ball around, teach offense and defense, be patient, and win games. For the first game, I spent the entire time on the sidelines observing since I'd never even seen a flag football game done before Saturday. I'm planning on running the defense during games going forwards. 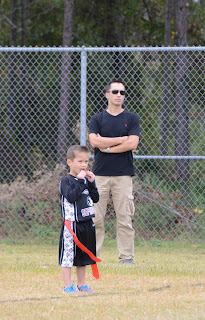