Pediatric Dentist checkup for the kids 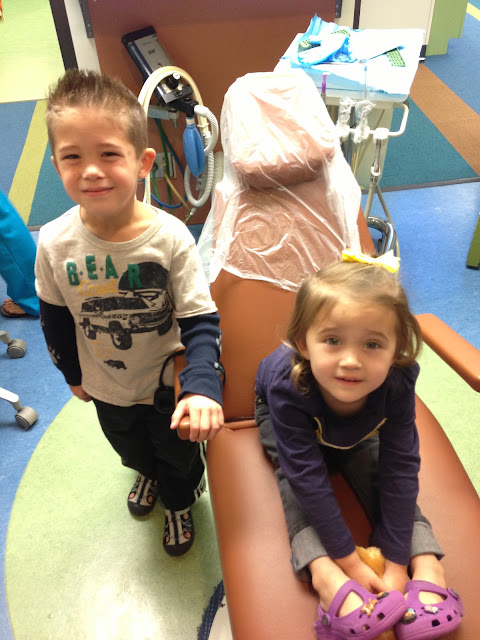 Today Connor and Paige went to the dentist together. Connor went once a long time ago, and was well overdue for another cleaning and checkup (http://babyvernon.blogspot.com/2009/10/first-trip-to-dentist.html).

We took them both to a Pediatric dentist that's in the area and we were very impressed. It was a very clean facility, had lots of kid-friendly entertainment, and the staff was experienced at working with children that may be nervous.

Connor's checkup went pretty well. All of his Primary (baby) teeth are in and we got a positive report on the cleaning we've been doing. All the teeth looked good and no major issues. Connor was very brave when they did the X-Ray. He gagged a little when they put in the bite-wings, but he toughed it out and they got good pictures as a result. The dentist was able to tell that Connor had sustained some kind of an impact to two of his front teeth, one on top and one on the bottom. The root on them is going away a bit faster as a result and they will probably be the first he loses sometime this next summer. It wasn't a major concern, but something to keep an eye on.

Paige has never been to the dentist, so we were very interested to see how she'd do with it. You never know with Paige. Sometimes the simplest little thing can become very difficult with her if she's not in the right frame of mind. This morning she actually threw one of the hugest fits on record when Mommy tried to fix her hair. We weren't sure how the dentist's office trip would turn out.

Thankfully, she was in a cooperative mood when we got there and her hygienist was great. Paige was a bit nervous, but the hygienist put her at ease. They got her teeth brushed with a toothbrush, then scraped them a bit with a dental pick and finally even tried the electric spinning brush. 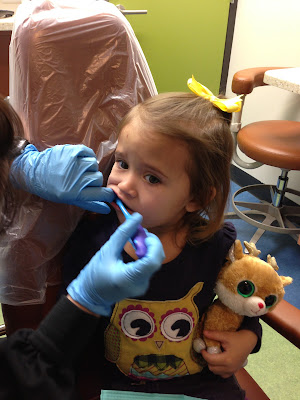 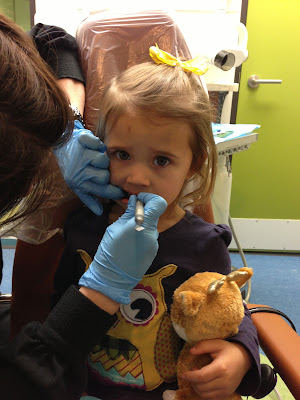 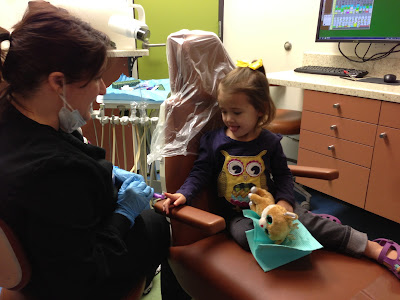 Finally they finished up with a fluoride treatment and the dentist examined her teeth. So far so good! We were pleased to hear that her teeth look great and we're doing well with the brushing and cleaning.

We're very proud of both kids today, they were
Posted by Shawn Vernon at 12:59 PM

Glad they did well and no problems.

Glad they did well and no problems.